At this point, it’s easier to list off the people that Drake hasn’t dated. Like Brad Pitt, Drake can’t stand beside a woman without someone linking them romantically. Since putting his acting days behind and adopting his hip-hop persona, the man born Aubrey Drake Graham has been romantically linked to a range of different women.

Drake has been romantically linked to Teyana Taylor, Taraji P. Henson, dancer Maliah Michel, Serena Williams, Rita Ora, Cyn Santana, Tatyana Ali, Blac Chyna, Bernice Burgos, Amber Rose, Zoe Kravitz, Bella Hadid — just to name a few. Drizzy reportedly gets around, something he made fun of in his “Falling Back” music video when he married around two-dozen influencers (Drake’s best man for the wedding was Tristan Thompson, someone else who has had his fair share of affairs.) There were even rumors that Drake hooked up with Kim Kardashian because of the In My Feelings lyrics (“Kiki, do you love me?”), which got Kanye “Ye” West all up in his feelings. Not to mention that time Drake was linked to Kylie Jenner in 2019, even though neither acknowledged the rumored relationship.

When Ye made his second appearance on the Drink Champs podcast on Sunday, Oct. 16, 2022, he made a claim that Drake hooked up with  Kim Kardashian‘s mom, Kris Jenner. “Drake is the greatest rapper, ever,” said Ye, before the hosts brought up a now-deleted IG post where Ye alleged “DRAKE A F – Y ABABY MAMA’S MAMA. THAT’S REAL WAR.” When pressed about what that message meant, Ye said, “You know what it means…Corey knows what it means,”

With so many allegations and innuendos flying around, here’s a look at Drake’s romantic history when it comes to relationships and girlfriends (and one particular date involving a 2 Broke Girls star).

Actress and singer Keshia Chanté is the actual “KiKi” from “In My Feelings,” and she happens to be Drake’s first girlfriend. Drake confirmed this romance during the 2022 OVO Fest. “This next person coming to the stage, I used to get in my mom’s car, and I used to drive all the way to the west for this one right here, you feel me? So, I have to personally introduce her,” Drake told the crowd.

“This is my first girlfriend I ever had in my life. A real legend, somebody I love with all of my heart,” he added. “Make some noise for Keisha Chante.”

Related: Drake’s Grammys Wins: How Many He’s Won & For What

Keisha paid tribute to the July 29 night with an Instagram post. “I’ve never seen the city come together like that! It was everything. A dream only [Drake] could make true. The most heartfelt & meaningful introduction I’ve ever had. Aubs, I love you for life,” she captioned a gallery of her performance.

Drake and Keisha dated up until the mid-2000s. Keisha was the first, but she wouldn’t be the last.

One of Drake’s other early loves was Jade Lee, the woman who inspired his song, “Karaoke.” Drake rapped, “Isn’t it ironic that the girl I wanna marry is a wedding planner? / Then tells me my life’s too much and then moves to Atlanta / I know they say the first love is the sweetest, but that first cut is the deepest.” In 2012, Jade and Drake reunited, per VladTV. Jade posted a photo of her and Drake in Atlanta, along with the caption, “10 Years ago, we use to dream about being a rapper and an event planner.”

Though Drake and Bria Myles dated from 2008 to 2009, she left an impact on him. Drake wrote “Bria’s Interlude” on So Far Gone, which he would later explain to MTV. “I was smitten over this girl from L.A., and I started writing a song about her,” he said, per BET. “A lot of the R&B [I do] is really based off women that come into my life and inspire me to speak to them in song and say what I never would expose on just a talking level.”

This is one that Drake hasn’t acknowledged, but Catya Washington said she and Drake were an item in the early 2010s. “I was in love. He was in love. I’m talkin’ family dinners, we in Whole Foods pushing the cart around, it was a regular relationship,” she told Hot 107.9 in 2011, per Vibe. Catya met on the set of his “Best I Ever Had” video, and sparks immediately began to fly. “We started dating in a month; it went from 0-60,” she said.

“But he started getting a little bit too loose,” she said. “He pops up in tabloids with [Maliah Michel]. Trips to Jamaica that I wasn’t invited to and never heard about. I’m from South Philly. You know we don’t go for that. That was my dude, not somebody I was just kickin’ it with.” 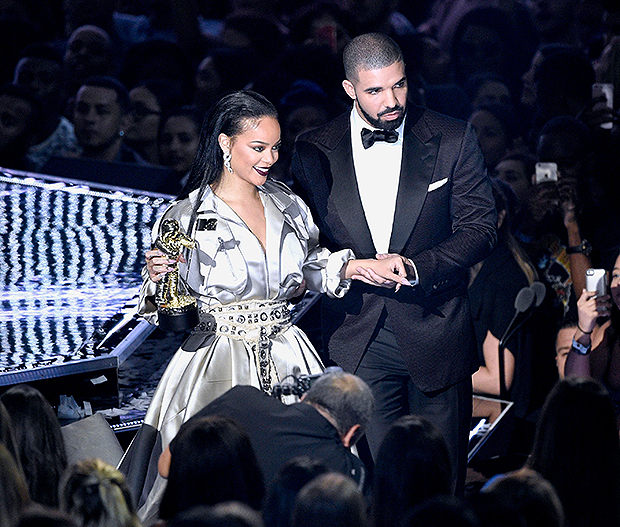 Arguably Drake’s biggest and most significant long-term relationship, the “God’s Plan” rapper first began dating Rihanna in 2009, four years after they first met (he was DJing at a Toronto restaurant, and she was filming the video for “Pon de Replay”). The romance fizzled afterward. “I was a pawn,” Drake told The New York Times in 2010. “You know what she was doing to me? She was doing exactly what I’ve done to so many women throughout my life, which is show them quality time, then disappear. I was like, ‘Wow, this feels terrible.’ ”

Drake and Rihanna would have an on-again/off-again relationship for the next decade or so. They reunited in 2010 but broke up by 2011. After her 2010s romance with Chris Brown, Rhianna got back with Drake in 2016.

“We love the videos, which change their artistic vision from year to year. But most of all, we love the woman who hasn’t changed since day one,” Drake said during his surprise appearance at the 2016 MTV Video Music Awards. Drake presented Rihanna with that year’s Vanguard Award, calling her “she’s someone I’ve been in love with since I was 22 years old, she’s one of my best friends in the world. All my adult life, I’ve looked up to her even though she’s younger than me. She’s a living, breathing legend in our industry.”

However, the romance faded once again, and by Spring 2017, it was over. “Waiting through that [MTV VMAs] speech was probably the most uncomfortable part. I don’t like too many compliments; I don’t like to be put on blast,” Rihanna told Vogue in 2018. “We don’t have a friendship now, but we’re not enemies either. It is what it is.”

Around 2018, Drake had his own personal drama, courtesy of Pusha T revealing Drake’s secret kid. By that time, Rihanna had already moved on with Hassan Jameel. In May 2022, Rihanna gave birth to her first child, a bay boy she welcomed with father A$AP Rocky.

Kat Dennings I just woke up out of bed to let you know you were a dime on Conan tonight. XO.

Drake and Kat Dennings went on one date together, but the story shows how Drake’s thirst continues to get him linked to so many women. “Kat Dennings, I just woke up out of bed to let you know you were a dime on Conan tonight,” Drake tweeted in 2011. He then tweeted directly to the Thor star, “I’m so proud of you.”

“What happened was, and I’m glad we’re talking about this, Drake was super nice and said something on Twitter about me,” she said on Chelsea Lately, per E! News. “I didn’t realize that happened. So when I got home, I had, like, 50,000 new followers out of nowhere…they were like, ‘F**k you, Kat Dennings’ and ‘You can’t take Drake from me. He’s mine.’ And then I realized what had happened, and then we started talking, and he’s super, super nice. He’s a lovely person. He’s a nice man.”

Kat said that she and Drake got sushi together on a “non-date” and was overwhelmed by the sheer number of people in his entourage and security detail.

Similar to how Drake’s relationship with Kim Kardashian was all smoke and no fire, Drake was briefly linked to the future Mrs. Justin Bieber. In early 2016, Drake spent some time with Hailey Bieber (née Baldwin.) What really got the rumor mill working was how Drake wore an “h” pendant while leaving The Nice Guy in Los Angeles. The $500 Jennifer Fisher pendant was identical to one that Hailey was spotted wearing earlier, suggesting she gave him something to remember her by.

However, she would later explain that they were just friends. “I’ve known [Drake] for a long time, I don’t know if people really know that,” she told E! News at the iHeart Radio Much Music Video Awards. She said he was a “great friend” but nothing more.

Jennifer Lopez and Drake were in each other’s orbits years before she posted the now-infamous photo of them cuddling together in front of what appears to be a fireplace. After Drake seemed stunned by J.Lo’s appearance at the 2013 Grammy Awards (per Capital Xtra), the two reunited at J.Lo’s Las Vegas show in 2016. The two appeared together in public a few more times, sparking more rumors of a romance. Then, on Dec. 28, 2016, J.Lo posted the picture.

The couple attended a “Winter Wonderland” party together, but the romance quickly fizzled out (a common theme in Drake’s life.) J.Lo would begin dating Alex Rodriguez before calling that off to reunite with Ben Affleck (whom she would marry in 2022.)

“I had to come to terms with the fact that it’s not a maybe / That s–t is in stone, sealed and signed / She’s not my lover like Billie Jean, but the kid is mine,” Drake raps on “march 14,” off of his 2018 album, Scorpion. The kid in question is Adonis, Drake’s child with Sophie Bressaux. Sophie was once an adult film star, but now reportedly lives in Paris and has found a passion for painting under the name “Sophie B.”

According to her website, Sophie is “an award-winning and published artist who combines her fascination for cultural & social paradigms with a love of colorful pop-art & symbolism” (h/t Nicki Swift). She is also the founder and artistic director of Arts Help, a non-profit organization.

The two reportedly met during his Boy Meets World tour in 2017. Adonis was born on Oct. 12, 2017, but Drake kept his son’s existence a secret until rival Pusha T exposed him in “The Story of Adidon.” Drake told Rap Radar in 2019 that he was initially unsure if he was the father since he has a history of women claiming they’ve gotten him pregnant.

Since acknowledging their son, Drake has helped co-parent Adonis with Sophie.

Drake caused another stir in July 2022 when he was spotted riding around a yacht in St. Tropez with YouTube star Suede Brooks. The 21-year-old woman (Drake, at the time, was 35) wore an off-shoulder shirt bearing a skeleton’s ribcage on the front over a bikini. The two didn’t do anything to indicate they were a couple, but they did spend the day together with friends on a raft. That was enough to cause speculation that Drake might have found his next girlfriend.