“Kimye” is officially a thing of the past. Kim Kardashian, 42, and Kanye West, 44, finalized their divorce on Nov. 29, 2022, a source close to the family confirmed to HollywoodLife. The former power couple had been married for more than six years, tying the knot on May 24, 2014 — after they first began dating in April 2012 — before Kim filed for divorce from the “Stronger” rapper in February 2021, citing “irreconcilable differences.” But some matters regarding the divorce were left unresolved… until now.

According to the final settlement obtained by HollywoodLife, Kim and Kanye will get joint custody with “equal access” to their 4 children — daughters North, 9, and Chicago, 4, and sons Saint, 6, and Psalm, 3. Furthermore, Kanye will pay Kim $200,000 a month in child support. He’s also responsible for 50% of their kids’ educational expenses, including tuition. He’s also responsible for 50% of their children’s security expenses. And if there’s ever a dispute regarding the kids, Kim and Kanye agree they will participate in mediation, according to TMZ. If one of them fails to participate, the other gets to make the decision in a dispute by default. There won’t be any spousal support, since they both waived that in the prenup, which also guided them on how to divide their assets. 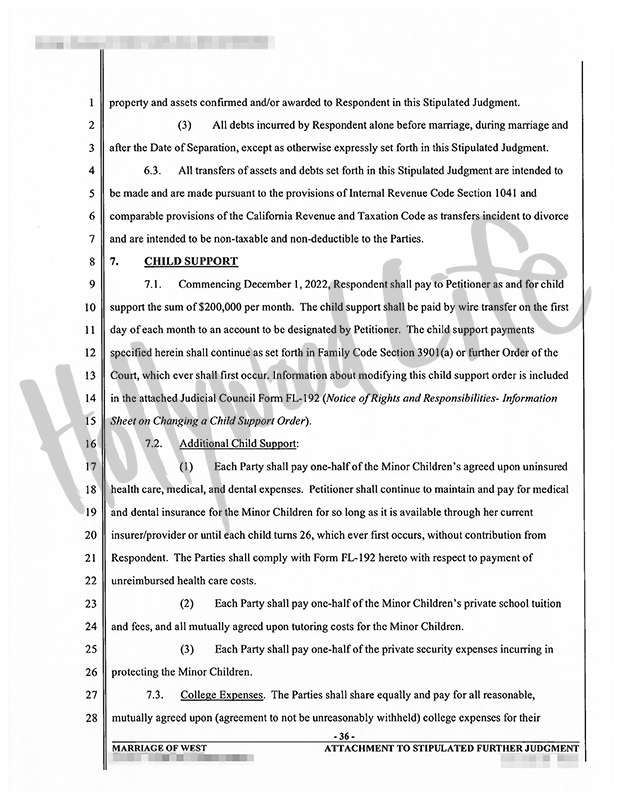 Per the docs, both parties agreed to each pay one half of the children’s private school tuition and private security, as well as any mutually agreed upon tutoring. Uninsured medical and dental costs will also be split evenly, with Kim maintaining and paying for the insurance policy on the children. The judgment also stipulated that both parents are welcome to attend extracurricular activities, regardless of whose parent time the activity falls on, and the parties must both agree on any enrollment in private or public school, as well as any mental health services.

Kim retains sole ownership over her personal effects, including clothing, furs, watches, handbags, and jewelry, while Kanye will keep his musical equipment, artwork, and studio equipment. Kim will keep her intellectual property, as well as all “interests” and “tangible and intangible assets” in her companies, including multiple branches of KKW. Kanye will also retain possession of his “personal effects,” as well as his audio and camera equipment, and his intellectual properties including recordings.

Neither parent is allowed to move the children’s residence more than 60 miles away from their current Hidden Hills, Los Angeles location, which would negate any possibility of living at Kanye’s Wyoming residence.  Both parties were granted access to the children for “special” days including birthdays, and, if they “should both choose,” can celebrate together. It’s worth noting that Kanye previously said he “wasn’t allowed” at Chicago’s fourth birthday celebration in January, but did end up attending.

HollywoodLife reached out to Kim and Kanye’s reps to further confirm this news, which was first reported by TMZ, but we have yet to receive any responses.

When Kim filed for divorce, she requested joint physical and legal custody of the couple’s four children. Kim and Kanye’s split was reportedly “amicable,” according to TMZ, and neither star contested the prenup that they had put in place. Kim did not list a date of separation in the divorce docs.

Kim and Kanye sparked divorce rumors during the summer of 2020, which was a contentious one for the former couple. At the time, Kanye mentioned divorcing Kim in a slew of tweets, and Kim later responded by revealing that her husband was dealing with his bipolar disorder. Unfortunately, tensions between Kim and Kanye only rose when the rapper held a “presidential” rally on July 19, 2020 in South Carolina. In a campaign speech, Kanye claimed the couple discussed aborting their first child, daughter North. Months later, in October 2020, speculation surfaced that the couple had been spending time apart when Kim began stepping out without her wedding ring. She and Kayne then later spent the holidays apart.

Despite the previous drama, Kim and Kanye appeared to have a friendly post-marriage bond at first. They continued to co-parent their children, and the Keeping Up with the Kardashians star even brought the four kids to the listening party for Kanye’s new album, Donda, at the Mercedes Benz Stadium in Atlanta, Georgia on the night of July 22. A month later, the exes stepped out for a lunch date together without their kids in Malibu. During that time period, Kanye was romantically linked to model Irina Shayk, though they reportedly split in Aug. 2021.

The friendliness seemed to change around the beginning of 2022, a few months after Kim started dating Pete Davidson. Kanye, who briefly dated Julia Fox around the same time, started posting his feelings about the way Kim was raising their kids, including his disapproval of their daughter North making videos on TikTok, and how he wanted to bring their family back together. He took to Instagram to also call out Pete by encouraging people who see him on the streets to shout out “Kimye” before sharing some of his own text messages with Kim, calling her his “favorite person in the world.”