Larsa Pippen, 48, spoke out about her romance with Michael Jordan‘s 31-year-old son, Marcus Jordan, after the couple was heckled at a football game on Nov. 20. Footage of the incident — which involved the heckler calling Scottie Pippen‘s ex-wife a “cold m*****f*****” — was posted on The Shade Room‘s Instagram, and Larsa promptly left a comment to defend her relationship with Marcus.

“I just met him 3 years ago I never knew him or his family,” The Real Housewives of Miami star claimed. “I was 21 yrs old and in college when Scottie played that one year w MJ and we weren’t friends with them like everyone thinks.” 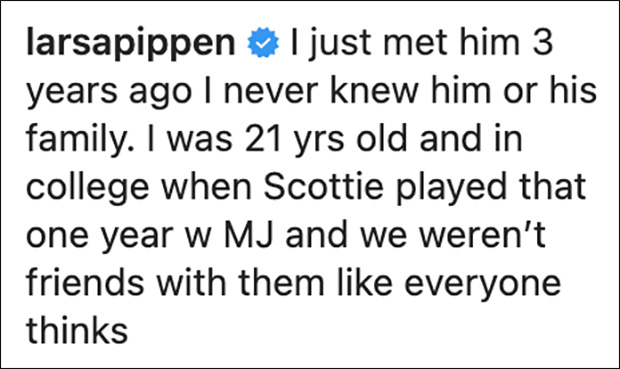 Larsa has been criticized for dating the son of her ex-husband Scottie’s former Chicago Bulls teammate Michael, 59. Larsa and Scottie, 57, finalized their divorce in 2021, after 24 years of marriage and four children. The reality star was rumored to be dating Marcus, who is 17 years younger than her, before they were spotted packing on the PDA at the beach in Miami on Nov. 14. That was after Larsa claimed that the pair are only “friends” at BravoCon 2022. “We’ve been friends for a few years and that’s really what it is,” she told PEOPLE.

On the couple’s date night at the Chargers game, Larsa and Marcus seemed unbothered by the fan who heckled their romance. “Ay Larsa that’s what you doin’? You with the boy Mike’s son? You a cold m*****f***** aren’t you?”, the stranger shouted at Larsa while recording her and Marcus. Larsa turned toward the heckler when he shouted her name, only to turn around when she realized what he was doing. Marcus, too, turned around but also chose to ignore the heckler’s comments.

After Larsa and Marcus basically confirmed their romance in Miami, a source close to the couple told HollywoodLife EXCLUSIVELY that the two have been “spending more and more time together and she feels a true connection with him.” They added, “He makes her happy and that is all that matters to her.”