Britney Spears, isn’t having the rumors of yet another new feud between her and former Mickey Mouse Club costar Christina Aguilera! The Toxic singer, 40, hit back at claims that she fat shamed Xtina, 41, in new comments posted to social media. “By no means was I being critical of Christina’s beautiful body, it is what it is !!!” she wrote via Instagram on Tuesday, September 13. “I flew to see her show once and the main thing I noticed was the difference of our people on stage !!! By no means did I even mention Christina, look at my post !!! I was inspired by her show and she is a beautiful woman of power … Thank you @xtina for inspiring me !!!”

Britney continued, explaining what she meant when she wrote in a previous Instagram post that if she “had Christina Aguilera’s dancers I would have looked extremely small”– a post that ignited a fan outcry. “To be honest, I’m not trying to be critical of anybody,” the Crossroads star continued.

“What I posted is a projection of the insecurities I deal with all the time as a result of how my parents and the media have treated me … I would never intentionally body shame anybody because I know what it feels like … I struggle with this because of how I feel about myself, not because I hate how anybody looks … I feel like my family knew I was insecure and people were trying to purposefully feed into this insecurity by not letting me have a choice in the people who were on stage with me. I appreciate you all being understanding with me as I figure out this new life I’m living !!!” she concluded the post, which included a drawing of two fairies.

At issue is Britney’s post from a day earlier on September 12, which allegedly caused the “Genie in a Bottle” singer to unfollow Brit! Indeed, Christina is not following Britney on the platform, but it’s unclear if that happened following the post.

“I wish I could have chosen the nannies for my children … my dancers … I mean if I had Christina Aguilera’s dancers I would have looked extremely small,” she wrote alongside a quote from Rodney Dangerfield reading, “I found there was only one way to look thin: hang out with fat people.” 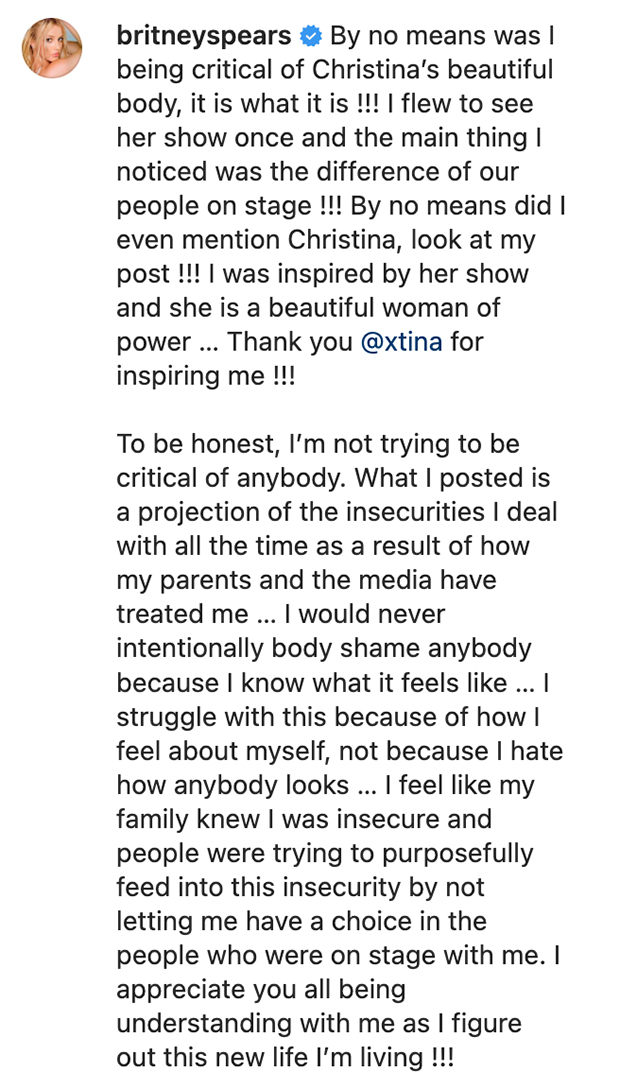 Britney added in the caption that her confidence was hurt by not having autonomy over her choices during her 13-year conservatorship. “I mean why not talk about it ??” she continued in Monday’s post. “Don’t you think my confidence would have been a bit better if I could choose where I lived, ate, whom I called on the phone, dated and who was on stage with me !!! It’s hard sometimes now I see how much of my womanhood was stripped away at that time and every person sat back and didn’t say a thing !!! I will be here talking bout things people NEVER talked about…”