“My name is Joycelyn Savage, and I’m Robert Kelly‘s fiancé,” Joycelyn, 26, writes in the letter she addressed to Judge Ann Donnelly, according to the documents obtained by HollywoodLife. Joycelyn wrote her letter on June 13, two weeks before R. Kelly, 55, was sentenced to 30 years on sex trafficking and racketeering charges. Along with claiming to be engaged to R. Kelly, Joycelyn told the court she was “not the victim that the government has portrayed me to be” and that her relationship with the disgraced singer was “amazing.”

“We have a very special connection and are deeply in love,” she wrote. “I still support Robert to this day because I love him and will always be here to support him. Robert is not the monster that the government has described him to be. The Robert I know is very sweet, gentle, and kind. At the end of the day, he has always made sure that I’m taken care of, and any other women he was with as well.” Joycelyn went on to describe R. Kelly as “incredible” and “positive, outgoing, and very generous.”

Gerald Griggs, an attorney for Joycelyn’s parents, told TMZ that she never made the engagement known to the family and that the subject never came up beforehand (the attorney did note that Joycelyn hadn’t spoken with her parents since 2016, when she left to be with R. Kelly).

Griggs did tell the publication that he “finds it odd Savage didn’t testify about it under oath, and instead slipped it into the letter submitted to the court.” Joycelyn’s family “strongly doubts” the engagement claim, per TMZ, and wishes to reconnect with her to get the whole story. 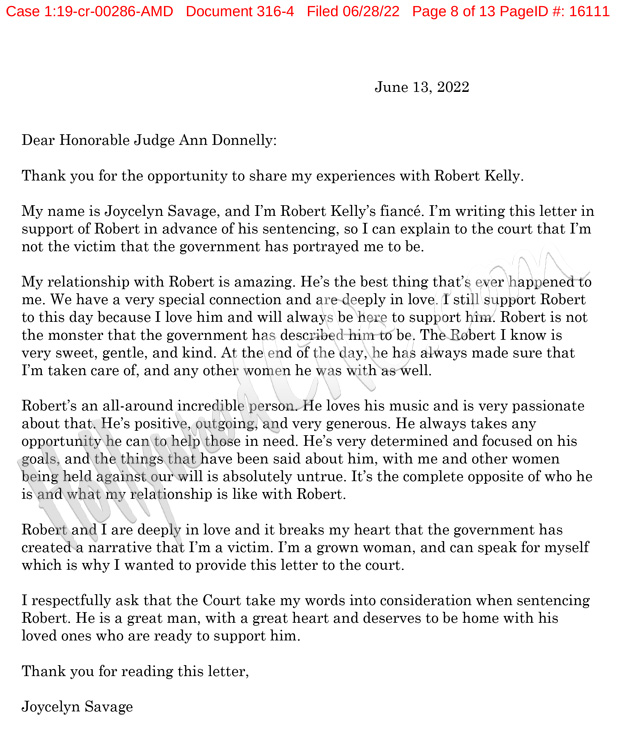 Joycelyn first met R. Kelly in 2015, when she was a 19-year-old aspiring singer. “Originally, one of my clients came into my boutique J. Savage collections in Atlanta, Georgia, and she had a contact that she was very close to [R. Kelly’s road manager Kevin Giles]… that she wanted to introduce us to after hearing about my girl,” the parents said during a May 2018 interview.

“When we got to go backstage with R. Kelly, we stayed there over two hours,” her mother said in 2017. “One-on-one with just me and my daughter and him. We went back to talk about the music. He listened to her CD. He was going to help her with her CD, and I was really impressed with him at first, because I have always been an R. Kelly fan.”

In the past, Joycelyn has denied the allegations that R. Kelly has brainwashed her and kept her against her will. “I’m 21… I am in a happy place in my life, and I’m not being brainwashed or anything like that,” she told TMZ in 2017. “I’m happy where I’m at, and everything is OK with me.”