Harrison Wagner’s unexpected death at the age of 27 has left his girlfriend, Sophia Bui, brokenhearted. “Seven years, on and off, round and round we loved each other,” she wrote on Instagram, along with a sweet selfie of herself cozying up to Harrison. “For better or for worse. In sickness and in health. Sorry I missed your calls in the middle of the night these last few days. I miss sleeping in your polar bear arms, curled up. I miss sending you silly animal videos. I miss you sending gorgeous songs that made me cry.” 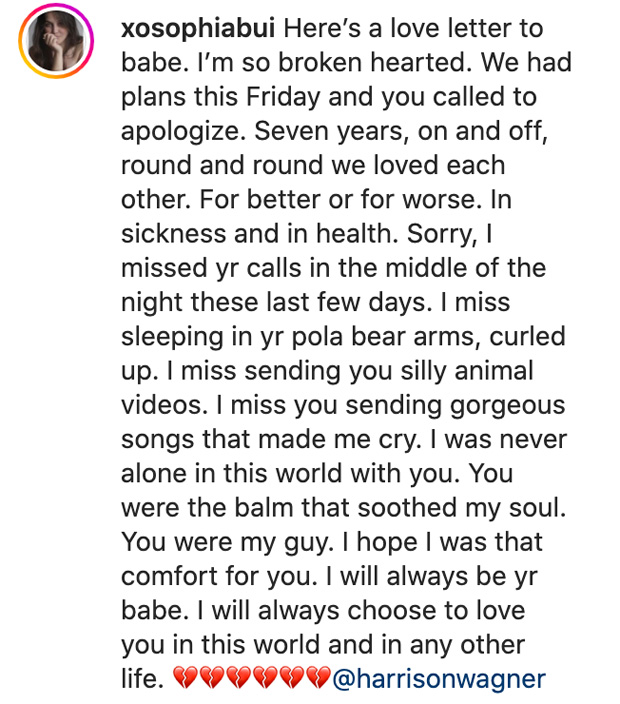 Sophia’s “love letter” to Harrison also said that she never felt “alone” when she was in this world with him. “You were the balm that soothed my soul. You were my guy,” Sophia concluded. “I hope I was that comfort for you. I will always be your babe. I will always choose to love you in this world and in any other life.” She finished her message with several red heart emojis.

Harrison, who is the son of General Hospital star, Jack Wagner, was reportedly found dead in a Los Angeles parking lot and pronounced dead in the early morning hours of June 7. The Los Angeles Coroner’s Department confirmed to HollywoodLife that a cause of death is still being investigated. The initial autopsy report was unable to determine the manner in which Jack died.

So far, Harrison’s parents, Jack and Kristina Wagner, have yet to publicly comment on this tragedy. The two married in 1993 and had two sons together (Harrison, as well as his older brother, Peter Wagner). Jack and Kristina split in 2006. Additionally, Jack has a 34-year-old daughter named Kerry Wagner from a previous relationship. Kerry’s birth mother put her up for adoption, and Jack did not meet her until 2011 when she was 23 years old and did a search for her biological parents.