Chris Brown posted the word “Congratulations” on his Instagram Story on the afternoon of May 19. The message seems to be directed towards Rihanna, whose baby news had just broken less than one hour before Chris’s post. Although he didn’t mention Rihanna by name, he did include a pregnant woman emoji. He also posted a red heart and prayer hands with the message. 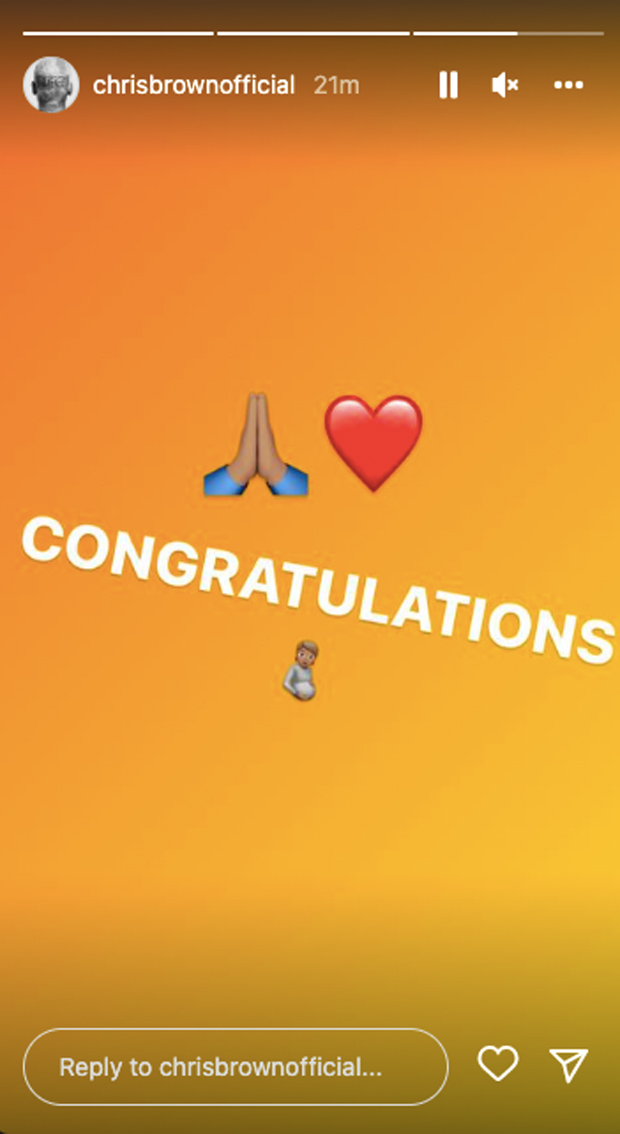 News broke on May 19 that Rihanna and her boyfriend, A$AP Rocky, had welcomed a baby boy six days earlier. Rihanna and A$AP did not comment on the news themselves, but official records showed that the baby was born. Of course, Rihanna famously dated Chris on and off between 2007 and 2013.

The pair’s relationship was filled with ups and downs, including Chris’s infamous physical assault on the night of the 2009 Grammy Awards. Although they briefly broke up after the attack, they wound up briefly getting back together in 2012 and 2013 before calling it quits.

Chris went on to have three children of his own. He shares his oldest daughter, Royalty Brown, with Nia Guzman, as well as a son, Aeko, with Ammika Harris, and daughter, Lovely, with Diamond Brown. Meanwhile, this is Rihanna’s first child. She and A$AP, who have been longtime friends and collaborators, got together at the beginning of 2020 and have been going strong ever since.

Rihanna confirmed her pregnancy at the end of Jan. 2022 with a stunning maternity shoot on the streets of New York City. In the months that followed, she showed off her daring and bold maternity style on a number of occasions. From crop tops to see-through shirts and more, Rihanna was not afraid to put her bare baby bump on display throughout her pregnancy, and she was applauded for her statement style choices.