It’s safe to say that La La Anthony’s son looks up to her, even though he’ll have to soon look down to talk to her. Kiyan Anthony joined La La, 39, on Sunday (May 15) at the Cathedral restaurant in New York City to celebrate the launch of her latest PrettyLittleThing collection. The 15-year-old son of La La and Carmelo Anthony stood a head taller than his mother, clearly taking after his 6’7”-tall father. Kiyan sported a white tracksuit that boasted lavender racing stripes that matched the purple on his shoes.

La La dressed more glam for the launch. The author, television personality, and entrepreneur wore a sparkly bronzed outfit that featured a lot of cleavage. The two-piece look featured a crop top with a strategic cutout that flaunted La La’s ample curves and a pair of high-waisted pants that hugged every inch of her figure. 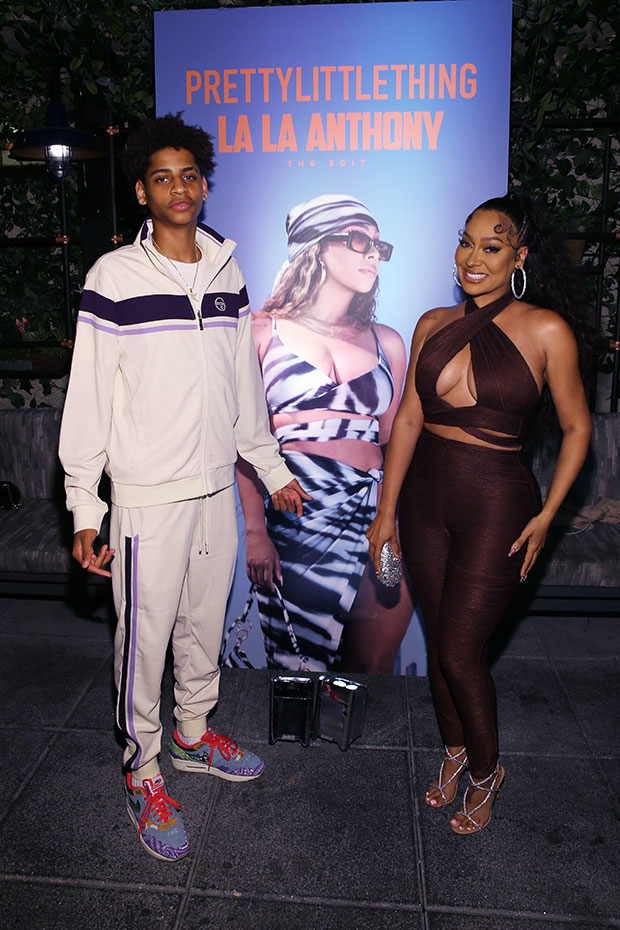 A week before her event in New York City, La La spoke about raising her son with her ex. “Co-parenting is amazing. We want to be a great example to our son. We have open conversations with him, like we tell him, ‘You were made from love. We’re still a family,’” she said in an interview with The Hollywood Reporter. “We do things together. We go to his games together. We try to keep it as normal as possible. I do it for my son. I don’t want my son to look at his parents like, ‘They didn’t get along, or they were arguing all the time,’ because he’s looking at us as an example of relationships he’s going to have in the future.”

La La and Melo married in 2010. Over the last handful of years, the couple had an on-again/off-again relationship until La La filed for divorce in June 2021. “I think that stepping away from that marriage was such an incredibly hard decision for me,” she told THR, “but it made me realize there’s nothing I can’t do. Staying is easier. Walking away is harder. Staying in your comfort zone — what you know, your house, your kid is happy cause their parents are together — that’s easier.” La La shared that she was with Melo since “he was 19 years old, like that’s all I’ve known,” and to step away from that to “build my own life” was scary. “I had to figure out what I needed to do then. And I’m still figuring out what I’m doing now,” she added.