At first glance, one might not think that Sofia Reyes and Danny Trejo would vibe together. She’s a glamorous, award-winning pop star. He’s an intimidating presence whose work includes films like Machete, From Dusk Till Dawn, and 3 From Hell. Yet, when watching their on-screen chemistry in Tostitos’ Fiesta Remix commercial, Danny and Sofia match up as well as tequila, mariachi, and Tostitos on Cinco de Mayo. “I am BFFs with Danny Trejo now, for sure,” Sofia tells HollywoodLife in an EXCLUSIVE interview about the new campaign.

“I just want to say, it was so fun to work with him and get to really meet him because it’s not that we would just talk during the shoot –we got to know each other,” continues Sofia. “He told me about his life, how he started acting, what he went through, and such. He was really inspiring!” This connection lasted beyond the shoot, as Sofia said she and Danny “exchanged numbers,” and they talked about her visiting one of his Trejos Tacos locations. “It was definitely a pleasure,” said Sofia. “I know that I’m going to keep seeing him. He’s a great person.”

“For years, I wanted to do something with Danny,” shared Reyes. “I didn’t know what it was. Maybe like for a music video, like a cameo — something. And I got very excited when this Tostitos campaign came up with Danny. I felt like I had been asking for it for years, and it just happened. And I don’t know, I’m, really, really grateful and excited about this whole thing.” 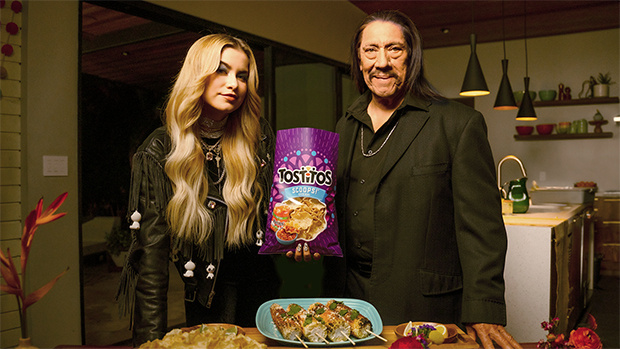 It does feel that Danny and Sofia were destined to cross paths. “Danny told me that his family comes from Monterrey. I’m from Monterrey, so that was interesting too. He grew up in the US. I moved to LA when I was 17,” she tells HollywoodLife. “We obviously lived completely different lives, but that culture has always stayed with us because that’s who we are. And we’re different generations too. I feel like our culture connected me with Danny, and that’s something that is very, very beautiful.”

“I found out that he’s going to turn 80 in two years or something,” she said with a smile. “And I’m like, ‘how? That’s crazy.’ He’s super young in every aspect.”

Perhaps the success of this campaign and the chemistry between Danny and Sofia should come as no surprise. After all, the not-so-secret ingredient in this Fiesta Remix campaign is the celebration of Cinco de Mayo – or, specifically, Mexican culture. The holiday itself commemorates the Battle of Puebla in 1862, where Mexican General Ignacio Zaragoza and a group of enlisted and volunteer troops defeated the invading, imperialistic French army.

Related: Danny Trejo: 5 Things To Know About Actor Who Saved A Trapped Child From An Overturned Car

While many might point out that more Americans celebrate Cinco de Mayo than Mexicans, that’s not a bad thing. It turns out that the victory had an impact on the American Civil War. The French were pro-Confederacy, per History, as Napoleon hoped to supply guns to the Southern traitors in exchange for cotton. Though the French re-took Puebla in 1863, by that point, it didn’t have an effect on the Union’s victory in the war. The victory also energized Mexican-Americans to support the Union in its fight against slavery and the Confederacy.

“It’s interesting because in Mexico growing up, we never celebrated Cinco de Mayo,” Sofia tells HollywoodLife. “When I moved to LA, almost ten years ago, it would be Cinco de Mayo, and they would make these big parties. You’d see fireworks and stuff like that. I was invited to my manager’s mom’s house, and we would make food, I don’t know. So I was like, ‘What are we celebrating? What’s going on?’ Because I didn’t grow up with it. 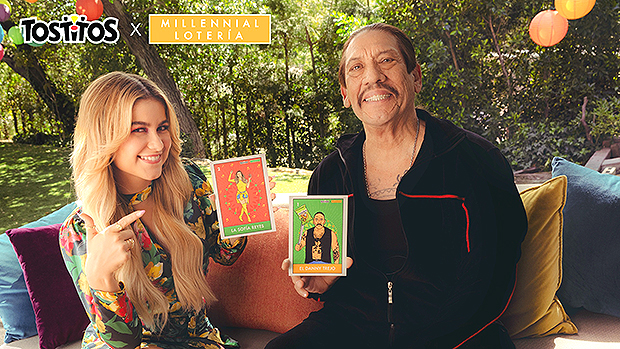 “And then I’ve been there for ten years, and we celebrate Cinco de Mayo since then,” she adds. “I’ve been celebrating every year. What I normally do is I get together with my friends, and we drink, we eat. Sometimes we go out. We dance. They play music, and we love it. And so it’s crazy because I didn’t grow up celebrating it. And now it’s part of my culture, as well.”

While the recent proliferation of the holiday may be suspicious, Cinco de Mayo has taken on a chance for everyone to take a day and appreciate Mexican culture. With Sofia and Danny, Tostitos are doing its part to promote this with their Fiesta Remix campaign. Tostitos has created a one-stop shop for all your Cinco de Mayo needs at Tostitos.com/FiestaRemix. On the site, visitors will find the “Fiesta Remixer” to get served an exciting mix of food, drinks, and music to take their fiesta to the next level. They will also find details about Tostitos’ partnership with Millennial Loteria to bring the classic game to TikTok.

Participants can complete nine challenges through a Branded Effect, with each successful challenge earning the users a signature Loteria card. Those who complete a challenge and use the hashtag #TostitosFiestaRemix are entered to win a Tostitos Fiesta Remix Party Pack on May 5, complete with a one-of-a-kind 5-carat gold Tostitos Scoop necklace and a year’s worth of Tostitos. Three additional runners-up will also win a custom Tostitos Loteria Kit, complete with Tostitos chips and dips.

“I grew up playing Loteria in my house,” said Sofia, who added it was “super cool” to see herself as a Loteria card. “I have Loteria paintings and stuff, and I want to decorate it. And I grew up eating Tostitos, and everything just makes sense now. Seeing my card was hilarious, and seeing Danny’s card with a machete was also hilarious. And then when they showed me the TikTok challenge, that was  fun too.”