Queen Elizabeth, 95, made her first in-person appearance on Monday, March 7 after recovering from COVID-19. The British monarch was pictured graciously shaking hands with Canadian Prime Minister Justin Trudeau, 50, at her residence at Windsor Castle in England. The Queen looked healthy and had a big smile on her face. She was dressed in a stylish blue floral dress for the meeting.

The Queen and Trudeau greeted each other in a room with red carpet. A floral arrangement of blue and yellow flowers was visible on a stand behind the pair. The color of the flowers matched the national colors of Ukraine, where Russian President Vladimir Putin has led a horrific and violent invasion. It’s possible that the Queen and Trudeau were meeting to discuss the War in Ukraine. 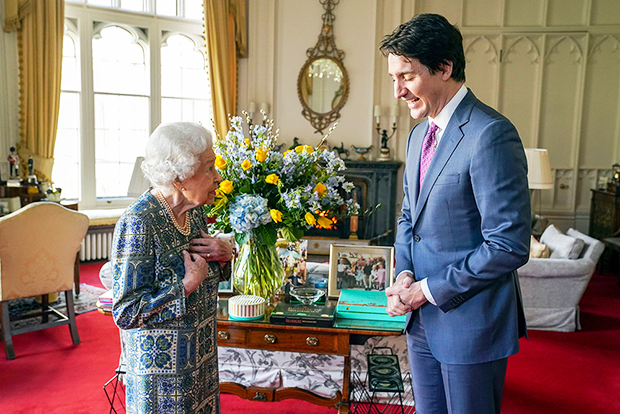 This was the Queen’s first in-person royal affair since her positive COVID test. She participated in some virtual meetings on March 1 with Carles Jordana Madero of Andorra and Kedella Younous Hamidi of Chad. The Royal Family shared a photo of the Queen calling in to greet the officials at Buckingham Palace, and she looked to be in good spirits on her computer monitor.

The Queen was fully-vaccinated and had received a booster shot when she tested positive for COVID-19 on February 20. Two days later, a since-deleted report from Hollywood Unlocked claimed that the Queen had passed away. However, Buckingham Palace later confirmed that the Queen was alive to CNN, and Elizabeth had a phone call with U.K. Prime Minister Boris Johnson from Windsor Castle.

It’s amazing to see Queen Elizabeth still so dedicated to her royal duties. She made history on February 6 as the first British monarch to mark a Platinum Jubilee with 70 years on the throne.

Related: Prince Edward: 5 Things To Know About Queen Elizabeth II’s Cousin Who Joined Her On Balcony