“Since filing for divorce, Mr. Kanye West, by his actions, has made it clear that he does not accept that the parties’ marital relationship is over,” writes Kim Kardashianand her legal team in a new set of court documents obtained by HollywoodLife. “Mr. West has disseminated on social media the parties’ private communications and misinformation about personal family matters and co-parenting, which has caused emotional distress,” adds Kim, 41. The filings come after Ye, 44, spending days attacking Kim and her new boyfriend, Pete Davidson, through multiple social media posts. Kim petitioned the court to be swift in “terminating [her] marital status,” because such an action “should help Mr. West to accept that the parties’ marital relationship is over and to move forward on a better path which will assist in peacefully co-parenting the parties’ children. Delay in doing so will only create further tension and anxiety.”

Kim also addresses one of Ye’s previous filings. Ye asked for Kim to give up any marital privileges with any future spouse pertaining to custody to their children – daughters North, 8, and Chicago, 4, and sons Saint, 6, and Psalm, 2. Kim called this request out for being “unprecedented” and is an apparent attempt by Ye “to prevent or make it difficult for Ms. Kardashian to remarry.” 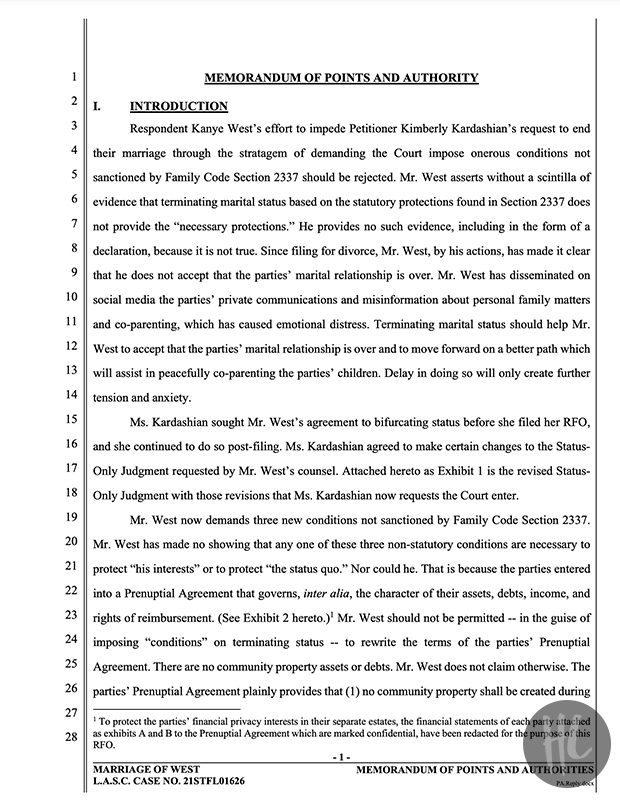 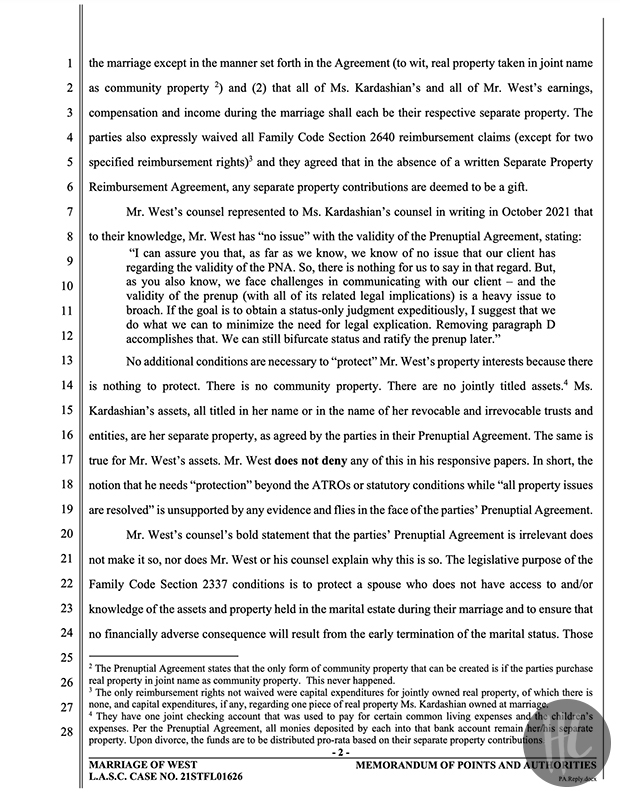 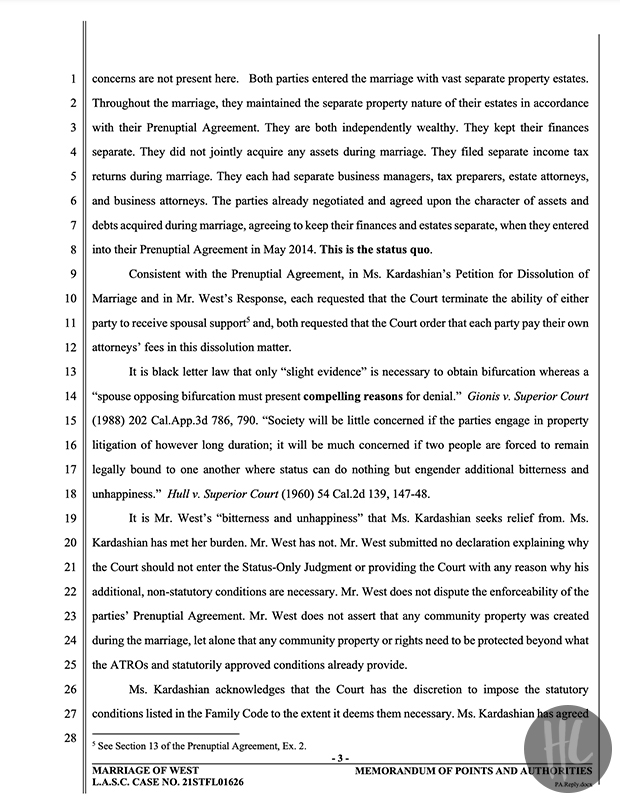 These new documents see Kim respond to Ye’s request for the court to prevent Kim from transferring assets out of any trust. Kim clapped back by saying that’s unnecessary, since they’ve never mixed their finances, due to their prenup.  “Mr. West now demands three new conditions not sanctioned by Family Code Section 2337. Mr. West has made no showing that any one of these three non-statutory conditions are necessary to protect ‘his interests’ or to protect ‘the status quo.’ Nor could he. That is because the parties entered into a Prenuptial Agreement that governs, inter alia, the character of their assets, debts, income, and rights of reimbursement,” the documents read. “Mr. West should not be permitted — in the guise of imposing ‘conditions’ on terminating status — to rewrite the terms of the parties’ Prenuptial Agreement.”

“No additional conditions are necessary to ‘protect’ Mr. West’s property interests because there is nothing to protectm,” writes Kim’s team in this new legal brief. “There is no community property. There are no jointly titled assets. Ms. Kardashian’s assets, all titled in her name or in the name of her revocable and irrevocable trusts and entities, are her separate property, as agreed by the parties in their Prenuptial Agreement. The same is true for Mr. West’s assets. Mr. West does not deny any of this in his responsive papers.”

“Both parties entered the marriage with vast separate property estates,” the document continues. “Throughout the marriage, they maintained the separate property nature of their estates in accordance with their Prenuptial Agreement. They are both independently wealthy. They kept their finances separate. They did not jointly acquire any assets during marriage. They filed separate income tax returns during marriage. They each had separate business managers, tax preparers, estate attorneys, and business attorneys. The parties already negotiated and agreed upon the character of assets and debts acquired during marriage, agreeing to keep their finances and estates separate, when they entered into their Prenuptial Agreement in May 2014. This is the status quo.” 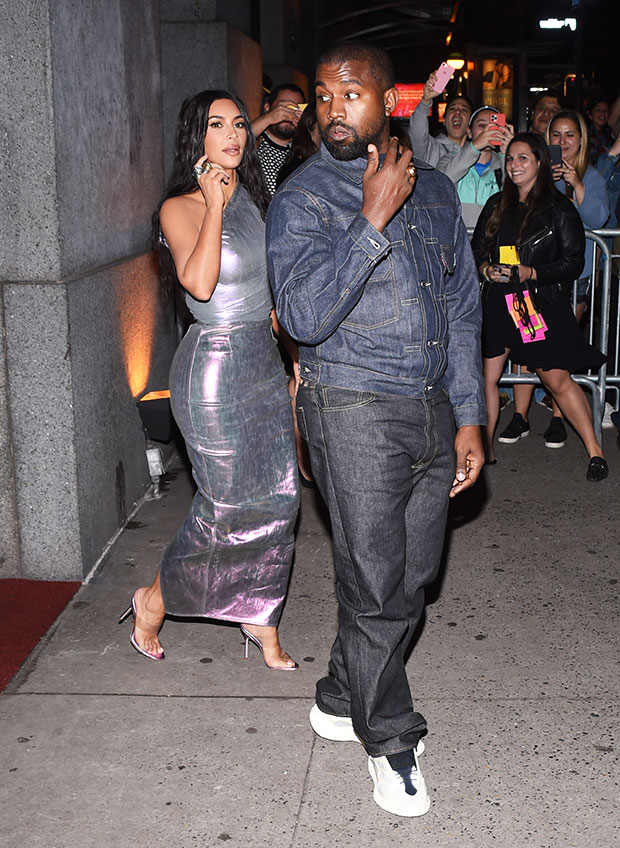 Kim’s legal team called out Ye, and made it clear she’s ready to make the split final. “It is Mr. West’s ‘bitterness and unhappiness’ that Ms. Kardashian seeks relief from. Ms. Kardashian has met her burden,” her team writes. “Mr. West has not. Mr. West submitted no declaration explaining why the Court should not enter the Status-Only Judgment or providing the Court with any reason why his additional, non-statutory conditions are necessary. Mr. West does not dispute the enforceability of the parties’ Prenuptial Agreement.”

“While I wish our marriage would have succeeded, I have come to the realization that there is no way to repair our marriage,” writes Kim. “Kanye does not agree but at least it appears that he has come to the realization that I want to end our marriage, even if he does not. I ask that the Court restore me to the status of a single person so that I can begin the healing process and so that our family can begin the healing process and move forward in this new chapter in our lives.”

Over the past week or so, Ye has posted-and-deleted numerous attacks on Pete and messages about Kim. It got to the point that Kim allegedly texted Kanye to stop out of fear that some of Ye’s sycophantic fans might take his online rantings as marching orders and “hurt” Pete. Kanye then shared that conversation with his followers. “UPON MY WIFE’S REQUEST PLEASE NOBODY DO ANYTHING PHYSICAL TO SKETE IM GOING TO HANDLE THE SITUATION MYSELF,” he tweeted, with an image of Ving Rhames choking out Tyrese Gibson, a scene from the 2001 movie, Baby Boy. When Kim supposedly asked Ye why he can’t keep their conversations private, he responded, “Cause I got a text from my favorite person in the world… Why wouldn’t I tell everyone!!!”