Time to relax. Gisele Bundchen, 41, was a vision while enjoying a beach stroll in Costa Rica on Saturday, Feb. 19. The world-class beauty looked effortlessly chic as she hit the sand in a casual ensemble during her vacation. 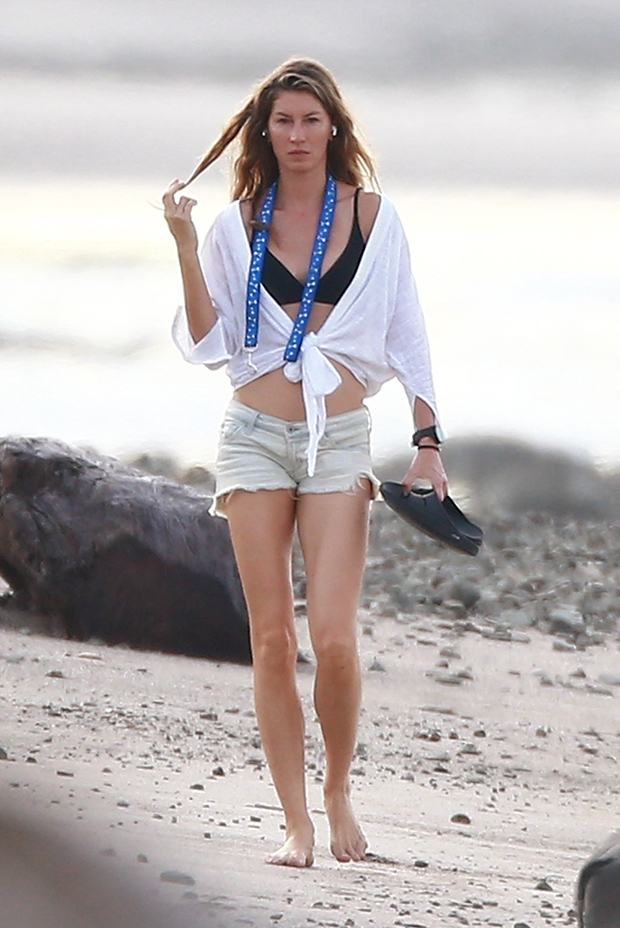 The former Victoria’s Secret stunner put her long, toned legs on display in a pair of tiny denim shorts as she made her way down the shore. Teasing her taut tummy, she teamed her Daisy Dukes with a black bikini and a white tie-up top. Gisele kept things minimal during her walk, where she went barefoot as she carried her shoes.

Not seen with the beauty was husband Tom Brady , 44, or their children Vivian, 9, and Benjamin, 12. The family has been enjoying some downtime in Costa Rica following the QB’s retirement announcement in early Feb. (Viv was with mom days before in a sweet Instagram, where the duo was seen riding horses through the scenic Costa Rican landscape.)

While Tom did say he was officially hanging up his cleats, football fans definitely haven’t seen or heard the last of him. In fact, the MVP hasn’t completely ruled out the possibility of returning to the field, telling people “never say never” during a Feb. 8 episode of his SiriusXM podcast. Tom’s message was more than just a platitude, as a source was able to EXCLUSIVELY tell HollywoodLife that there is “without question a chance for him to return.”

“When he mentioned ‘never say never’ on a return, it is more than just words,” the insider said. “Tom is going to monitor the NFL off-season with a fine-tooth comb because if the pieces fall into place, he’d be interested in returning.” The 7-time Super Bowl champ isn’t going to give up his retirement plans for just any old NFL squad though, per the source. He’d like to suit up with players who have the eye on the big prize. “He’d be interested in joining a team who are close to winning a Super Bowl, like the San Francisco 49ers.”