Tim McGraw and Faith Hill paid their oldest daughter, Gracie McGraw, a visit in New York City recently. The couple was in town to promote their show 1883, and since Gracie lives in NYC, she got to spend time with them. The trio went on a stroll with Gracie’s dog, and the 24-year-old captured the sweetest photo of her parents holding hands on the sidewalk. Tim and Faith were bundled up in winter coats for the outing, while Gracie walked behind them to snap the picture.

Just days before Tim posted the photo, he and Faith arrived in NYC for an appearance on The Late Show With Stephen Colbert. Tim and Faith are currently both starring on the Yellowstone prequel, 1883, which streams on Paramount+. Meanwhile, Gracie moved to the Big Apple in 2021 and has been building her life there in the months since.

Gracie has followed in her parents’ singing footsteps and has expressed desire to star on Broadway. She often posts videos of herself singing songs from Broadway shows on Instagram. So far, she hasn’t booked an acting gig, but she seems to be enjoying her independence in NYC in the meantime! In addition to Gracie, Faith and Tim are also parents to daughters Maggie McGraw, 23, and Audrey McGraw, 20. 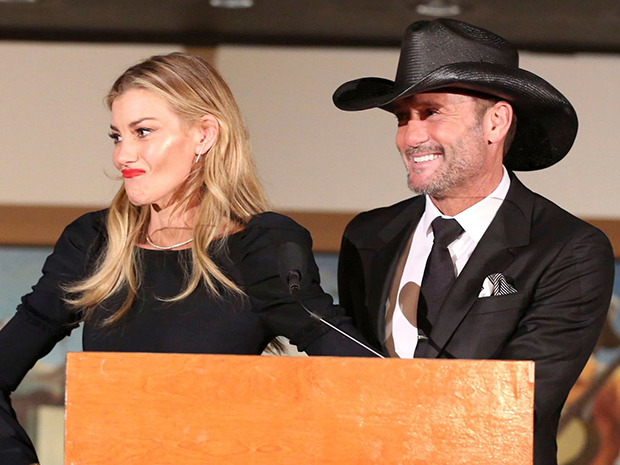 While Tim has spent the last several months dedicated to acting, he’ll be back on the road with his music in 2022. The country superstar will play a string of dates over the next few weeks before kicking off The McGraw Tour at the end of April. The tour wraps on June 3 and will also feature Russell Dickerson, Brandon Davis and Alexandra Kay. This will be Tim’s first chance to tour since releasing his 2020 album, Here on Earth.