Winter has been in full effect for a few months now, but it feels as if every season has been filled with drab, dreary days. The impacts of lockdowns, political strife, supply-chain shortages, and years of chaos might leave people seeing nothing but a slate of gray when they look outside. However, UK noise-pop rockers Superlove are here to remind us that life can be a tableau of vivacious reds, dazzling blues, jubilant yellows, and all the other “Colours” of the rainbow. “I wanna throw it away and feel a burst of colour,” sings Jacob Rice, one-half of the duo, in the new song, premiering here on HollywoodLife. “Oh I spend too many days chasing my mind / it wanders / Won’t let this life fade to grey, no I’ll give it colours / Oh, just like no other, I’ll give it colours.”

With Jon Worgan’s guitar lick, the song takes off like a butterfly discovering the joy of flight for the first time, before exploding like Rangwali Holi, the Hindu “Festival of Colours.” Superlove’s song uplifts the spirit like the first day of spring. If you need some help peering through the overcast of the soul, “Colours” will help chase those clouds away. 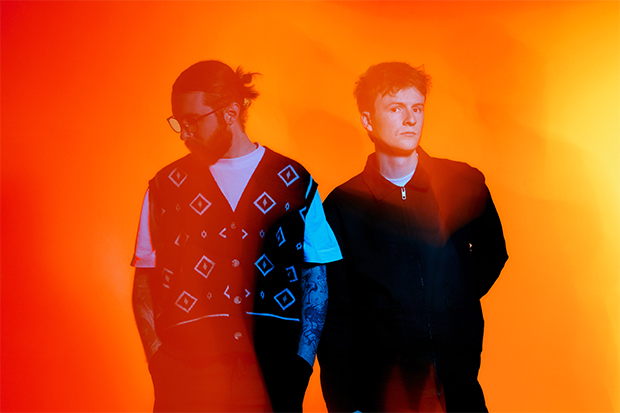 “This single we wrote in really early 2020,” the band tells HollywoodLife, “it’s just a huge anthemic/festival fireworks moment of a song in our heads, was such a fun chorus to write and put together too as you could throw so many layers at the parts to just give it that huge wall of sound vibe we wanted. “[We] remember Jonathan had the title ‘Colours’ before anything else, and as soon as this song started coming together, it became apparent very quickly that this song should be called that.”

“The song lyrically is honestly about social anxiety, something [we] know a lot of people deal with day to day,” the group adds. “It was really important for me to try and put the feeling into lyrics and link together emotions with colours. The chorus lyrics are about wanting to throw all your negative and anxious feelings from your brain into a big tunnel-like-bin that looks similar to the stargate scene in 2001: A Space Odyssey. This song has some of my favourite lyrics we’ve written so far, really really happy to have this song finally out.”

2022 continues to be Superlove’s year. “Colours” arrives a month after the band shared “Maybe I Could Tell You,” a song that showed a new side of the band’s creativity. And the band’s song, “Book A Holiday,” was featured during the Kansas City-Buffalo Bills playoff game, a football clash deemed one of the best of all time. Millions likely heard the band for the first time and judging by how infectious “Colours” is, they can’t wait to hear more.