“This is officially the worst tailgate I’ve ever been,” says one Roman citizen at the start of Avocados From Mexico’s entry into the Super Bowl LVI commercial game. While visiting a colosseum ahead of a big game – probably the Gladiators versus the Lions – the citizens watch as a barbarian puts himself through a plastic folding table, not unlike those viral clips of Buffalo Bills fans. However, when the barbarians bust out the Avocados From Mexico, everyone is suddenly on the same team. Enter Caesar, aka Andy Richter. “You know, they also taste great on salads,” he says, gleefully. “Yeah, Caesar, we get it. You love—” “I love salads!” says the Emperor. The extended version gives Andy one more line – “If that’s all I’m known for, I’ll be happy,” he says – while also showing the rivalry between the barbarians and the Spartans.

They say, if the gold-leaf crown fits…and Andy was a perfect fit for this spot, judging by the teasers. In the previews, Andy convinced himself he’s right for the role of a lifetime: Julius Caesar. The full ad, set to play in the first quarter, will be Avocados from Mexico’s seventh showing at America’s biggest game. In the short, silly ad, Andy gives himself a pep talk on-set and enjoys some guacamole while he’s at it.

In the clip, which Andy shared to Twitter, though the comedian sports gold armor, a red cape, and a crown, he’s not so sure he can pull this off. “I’m not even Italian,” he frets, but after noticing the guacamole in front of him, he’s reminded there are people (and avocado brands) out there who believe in him. Andy thinks of his agent, his therapist, and everyone who supported him in taking on the role of Caesar. He concludes on a positive note, but also with a forward-thinking question: “I wonder if I can keep this breastplate?” 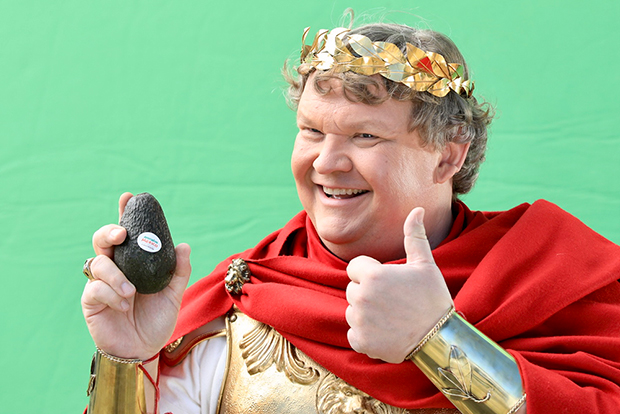 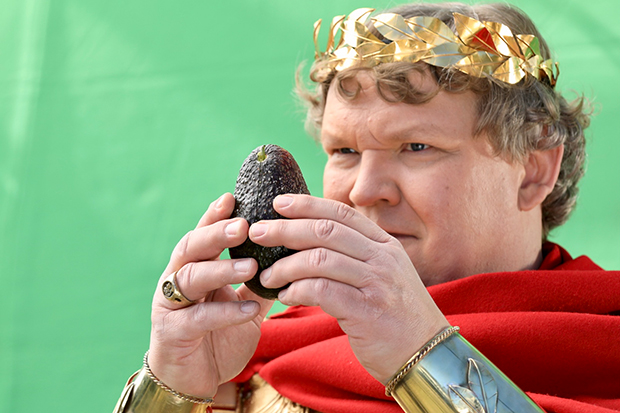 With the Super Bowl only a matter of days away on Sunday, Feb. 13, brands are going full steam ahead with their advertisements, and a creative variety of teasers have already been shared. Elaborate ads we’ve caught glimpses of so far include Guy Fieri as the ‘Mayor of Flavortown‘ for Bud Light Seltzer, Seth Rogen reliving the buddy comedy of a lifetime with Paul Rudd for Lays, and Arnold Schwarzenegger taking on his own role of a lifetime as Zeus for BMW. Though the main event will see the Los Angeles Rams face off against the Cincinnati Bengals, some would argue the real show occurs at half-time, where superstars Mary J Blige, Kendrick Lamar, Dr. Dre, Snoop Dogg, and Eminem are all set to perform this year. In a dramatic half-time show teaser produced by Pepsi, the dream team comes together to descend upon SoFi Stadium for a one-of-a-kind collaboration. The teaser finds Eminem rap battling a younger version of himself while Mary looks paid and pretty in a luxury sports car and fur coat. Whatever the full event on Feb. 13 will reveal, the teasers have brought the excitement in the air to a new level.