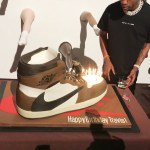 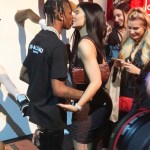 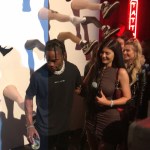 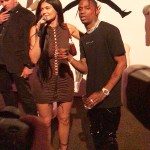 Travis Scott has been completely absent from social media since the tragedy at Astroworld, which resulted in 10 deaths and 100s of injuries.

Couples who return to Instagram together stay together. Travis Scott, 30, returned to social media just prior to the New Year – at the same time as his pregnant girlfriend, Kylie Jenner, 24. In a post dropped to his Instagram page on December 31, 2021, Travis shared a black and white photo, showing only his profile and looking down towards the ground. In the caption, he wrote “Always <3.” Kylie – who is the mother of his daughter Stormi, 3, and pregnant with the couples’ second child, commented on his post with two hearts.

As HollywoodLife previously reported, Kylie also returned to the social media world before ringing in New Year. The makeup mogul posted a black and white photo and was turned to the side, cradling her massive baby bump. As fans should know, Kylie is expected to give birth to their second child, whose gender has not been revealed, at any time. In the caption to her photo, she wrote, “As 2022 is approaching I’ve been reflecting on this last year and the blessings that it brought but also the many heartaches it held. I will never forget this year and all the significant changes it made to my life. I pray this new year is filled with a lot of love for all of you and I hope everyone stays safe and healthy during this time.”

Her famous family, including mother Kris Jenner, 66, showed her support for Kylie’s post and wrote “I love you my precious girl you are an angel” in the caption. Kylie’s sister, Kendall Jenner, 26, — who was with Kylie at Astrowrld the night that the tragedy occurred, commented on her sister’s post with three burning heart emojis. After the incident, on November 8, Kendall released a statement, which read, “I’m truly broken for the families that have lost loved ones and my prayers go out to everyone involved, Sending everyone who has been affected all of my love and wishing them strength during this incredibly devastating and sensitive time.”

Prior to the Astroworld tragedy – Travis’s show in Texas on November 5, 2021, which resulted in 10 casualties and 100’s of injuries of fans who got crushed by a crowd surge – the couple were spotted often. Since then, they have been MIA, aside from both being seen by close friends and family at her recent baby shower. Although Travis was in attendance at the baby shower, which was held in mid-December, he was said to have kept a “low profile” due to tragedy. Currently, Travis and event organizers are being sued for “billions” of dollars by injured at the event.