Brad Pitt tries to swoop in and be Sandra Bullock’s hero in the first trailer for ‘The Lost City,’ and Channing Tatum is not a fan.

The Lost City was already going to get us into movie theaters, but the final moments of the first trailer have us wanting to see it immediately. Brad Pitt makes a cameo appearance when he tries to rescue Sandra Bullock’s character Loretta Sage. He scales a fence and takes out a guard to get to her.

“Loretta Sage, I’m getting you out of here,” Brad says. Loretta asks him, “Why are you so handsome?” Brad replies, “My dad was a weatherman.” Brad is rocking a sexy man bun in the film.

As he tries to free her from the restraints, Brad gets a little too close to Loretta for Channing Tatum’s liking. “Hey, whoa. She doesn’t need saving in there. What are you doing in there?” a nervous Channing, who plays Alan. 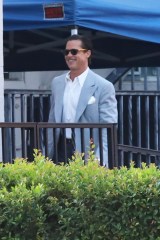 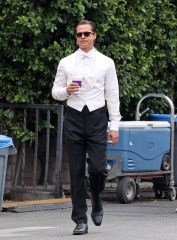 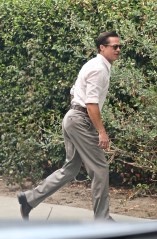 The Lost City follows reclusive author Loretta Sage who has spent her career writing about exotic places in her popular romance-adventure novels featuring handsome cover model Alan, who has dedicated his life to embodying the hero character, “Dash.” While on tour promoting her new book with Alan, Loretta is kidnapped by an eccentric billionaire (Daniel Radcliffe) who hopes that she can lead him to the ancient lost city’s treasure from her latest story. Wanting to prove that he can be a hero in real life and not just on the pages of her books, Alan sets off to rescue her.

The trailer is full of hilarious and epic moments between Loretta and Alan. At one point, Loretta is forced to pull leeches off of Alan’s back. Alan has to strip naked because there are more leeches on his butt. “They’re just sucking on my butt like a big ole Jamba Juice,” he says to a stunned Loretta.

The movie also stars Da’Vine Joy Randolph, Oscar Nuñez, Patti Harrison, and Bowen Yang. The Lost City will be released only in theaters on March 25, 2022.