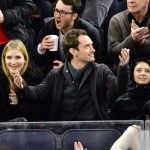 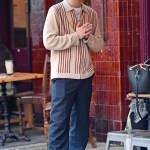 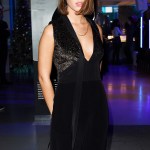 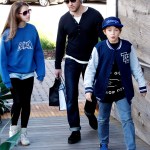 Rafferty Law was spotted hanging out with pals at the popular London pub The Walmer Castle, which is owned by former footballer David Beckham and film director Guy Ritchie.

Graham Simpkins, is that you?! Jude Law‘s son Rafferty Law, 25, looked just like his 48-year-old dad’s character from the 2006 movie The Holiday when he was photographed enjoying a smoke and chat with friends outside a London pub on Dec. 12. The pub was The Walmer Castle, which is owned by David Beckham and Guy Ritchie, and the handsome lad was all smiles while engaging in a conversation around cameras.

He wore a light tan zip-up long-sleeved top with red stripes and blue pants during the outing. He also wore black boots and appeared to be chatting with an unidentified woman at one point. His curly hair was reminiscent of his dad’s, especially when he was younger.

This isn’t the first time we’ve seen Rafferty, whose mother is Sadie Frost, out and about. The Jude look-alike has followed in his father’s footsteps by acting in a few things and wowed readers when he posed for British GQ digital special, GQ Hype in Jan. The hunk showed off his amazing blue eyes and attractive features as he laid back with his hands above his head in the gorgeous photo. 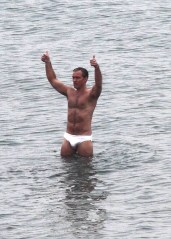 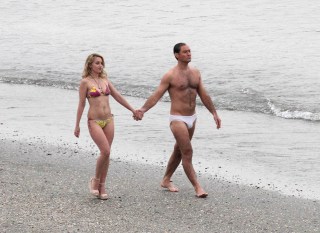 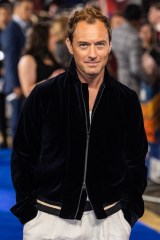 Some of the things Rafferty has acted in include the film Twist, which is a thoroughly modern retelling of Charles Dickens’s Oliver Twist, and the 2020 short film The Hat. Although he’s been compared to Jude due their similar looks and career paths, the younger Law has admitted he doesn’t like to compare himself to anyone.

“I’m someone who really tries not to compare themselves to anyone else. I really try and ‘do me,’” he said Raff when asked about what it’s like having an “international sex symbol” like Jude for a father, in his British GQ interview. “My dad’s my best mate; he and I have always been so close. Like any father and son, growing up I looked up to my dad a lot. I’ve always liked the way he dresses – he loves trainers, so that got me into trainers from a young age. He likes good music and that got me into the same.”