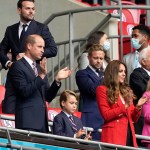 Prince William and Kate Middleton shared an adorable photo featuring their two princes and one princess who are all growing up way too fast!

A royal holiday gift! Prince William, and Kate Middleton, both 39, kicked off the festive season by sharing an adorable family photo featuring Prince George, 8, Princess Charlotte, and Prince Louis, 3, for their annual Christmas card. Taking to Instagram on December 10, the Duke and Duchess of Cambridge posted the heartwarming snap which has all five family members wearing smiles during a family vacation to Jordan. “Delighted to share a new image of the family, which features on this year’s Christmas card,” the proud parents captioned the photo.

“The Duke and Duchess of Cambridge are pleased to share a new photograph of their family,” a statement from Kensington Palace also read. “The photograph, which features on Their Royal Highnesses’ Christmas card this year, shows The Duke and Duchess with their three children Prince George, Princess Charlotte and Prince Louis in Jordan earlier this year.”

Kate looks simply chic in her olive green dress, while Prince William coordinates in a matching shirt and khaki shorts. The cute couple place their hand on each other’s knee, as they wrap their other arms around George, who is sporting a camouflage shirt, and Charlotte, who is as cute as a button in her blue plaid dress. Louis sits cross-legged in front of the group to complete the beautiful family portrait.

Prince Williams’s Younger Years: Photos Of The Royal In His Pre-Teens, Teens & 20s 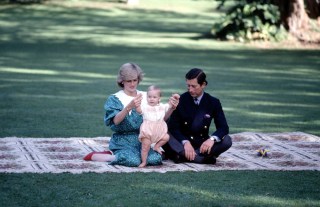 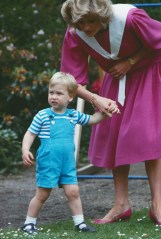 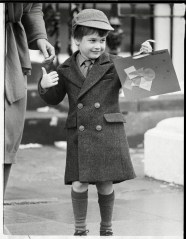 The family Christmas card comes just days after Prince William hilariously admitted he has to play peacemaker between George and Charlotte at the start of each day. The future king of England went into detail about how the royal family has a dance party morning ritual, which ends up causing the eldest siblings to argue.

“Most mornings there’s a massive fight between Charlotte and George as to what song is played in the morning,” William explained on a special Christmas episode of Apple Fitness+’s Time to Walk series. “And I have to, now, basically prioritize that one day someone does this one, and another day it’s someone else’s turn. So George gets his go, then Charlotte gets her go. Such is the clamor for the music.”

“One of the songs that the children are loving at the moment is Shakira’s ‘Waka Waka,’ ” William continued. “There’s a lot of hip movements going along. There’s a lot of dressing up.” It sounds like little Charlotte makes the most of the early a.m. festivity. “Charlotte, particularly, is running around the kitchen in her dresses and ballet stuff and everything,” added the proud papa. “She goes completely crazy with Louis following her around trying to do the same thing. It’s a really happy moment where the children just enjoy dancing, messing around, and, and singing.”