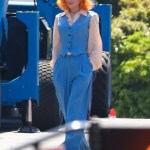 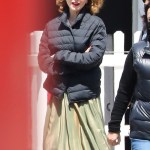 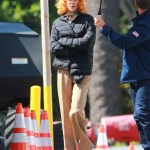 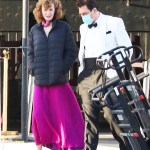 Nicole Kidman stunned in an elegant white dress at the premiere of ‘Being the Ricardos,’ her upcoming film about Hollywood power couple Lucille Ball and Desi Arnaz.

Nicole Kidman looked old Hollywood elegant at the premiere of her upcoming film, Being the Ricardos. The Academy Award winner, 54, wore a simple white dress with black bows towards her waist at the premiere in New York on Thursday, Dec. 2.

Her co-star Javier Bardem also looked dapper on the blue carpet, wearing a plum purple blazer over a white button up and black dress pants. The actor, 52, stars opposite Nicole in the biographical drama centered on Hollywood couple Lucille Ball and Desi Arnaz.

Directed by Aaron Sorkin, the film will explore the complex personal and professional relationship between the late stars and former husband and wife, beloved for their 1951 sitcom I Love Lucy and other iterations and spin-offs that followed.

Nicole Kidman -- Pics Of The Actress 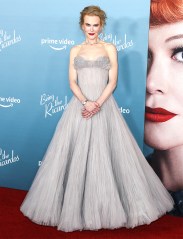 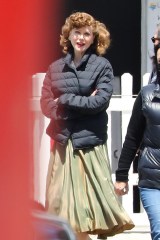 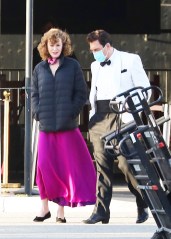 The film, out in theaters on Dec. 10 and Amazon Prime Video on Dec. 21, also stars Nina Arianda as Vivian Vance and J.K. Simmons as William Frawley. The news of Nicole’s casting as the famed actress and comedian initially caused a stir: some fans bemoaned the fact that the actress bears no resemblance to Lucille. Aaron defended the casting choice in February, assuring movie-goers that Nicole and Javier are “fantastic.”

“I think that the people thought that we’ve cast them as Lucy and Ricky Ricardo,” the director told Entertainment Tonight in February. “The film takes place during a production week of I Love Lucy — a Monday table read to Friday audience taping, with a whole bunch of long flashbacks which are telling the story that got us here.”

He continued, “Because there’s a table read, there’s rehearsals and then there’s tape night, [so] we do see moments of them being Lucy and Ricky Ricardo. We see moments from an episode of I Love Lucy. But mostly they are playing Desi Arnaz and Lucille Ball. And they’re going to be fantastic. These are two of the greatest actors ever.”

As for the backlash of her casting, Nicole recently admitted that it caused anxiety, revealing that she tried to drop out of the role. While she loved the screenplay, “When the reality of playing her hit me, I went, ‘What I have said yes to?'” she said while on Live With Kelly and Ryan on Thursday. “To which I then went, ‘Oh no, I’m not right. Everyone thinks I’m not right, so I’m going to try to sidestep this.'”

The film crew, of course, had other ideas, much to her appreciation. “The producer Todd Black and Aaron Sorkin were both like, ‘Absolutely not,'” Nicole said. “I was in Australia and they were like, ‘No.’ And thank God, because then I was so grateful because I got to fall in love with her.”