Mariah Carey had quite the shady response about her ex Nick Cannon when an interviewer brought up the five children that Nick has with three other women.

Nobody is off limits to Mariah Carey‘s shade — not even her ex-husband, Nick Cannon. Mariah, 52, had her latest epic shade moment during an interview with Entertainment Tonight about her upcoming Christmas plans, when host Kevin Frazier broached the subject of Nick’s five children that he shares with three different women, in addition to his and Mariah’s 10-year-old twins, Monroe and Moroccan. “So let me ask you this: will any of their stepbrothers or stepsisters enjoy Christmas your way?” Kevin said to Mariah. “Because it’s a special way.” But Mariah didn’t give an exact answer, and instead harped on the fact that Kevin used the term “step” when referring to Monroe and Moroccan’s relations to Nick’s other kids.

“Is it step?” Mariah said. “I don’t think it’s step. If you’re not married to the person…I don’t know about that.” Gotta love Mariah’s shade! And technically the Queen of Christmas is right: Nick didn’t marry Brittany Bell, Abbey De La Rosa, or Alyssa Scott, who are the women he shares five out of his seven children with. So technically, Monroe and Moroccan are half-siblings to the other kids, not step-siblings. With Brittany, Nick has son Golden, 4, and daughter Powerful, 11 months. He’s also a father to twins Zion and Zillion, whom he welcomed this past June with Abbey. Last but not least, his and Alyssa’s son Zen was born this past July.

The Wild ‘n Out star’s parentage has been quite the hot topic this year, to the point where Nick has had to defend having kids with multiple women. In August, he told The Breakfast Club host Charlamagne Tha God that having children with one person seemed like an outdated concept. “That’s a Euro-centric concept when you think about the ideas of like, you’re supposed to have this one person for the rest of your life, and really that’s just to classify property when you think about it,” he said. “Those women, all women, are the ones that open themselves up and say, ‘I would like to allow this man in my world. And I will birth this child.’ “ 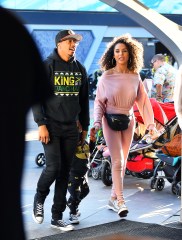 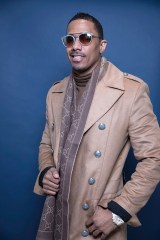 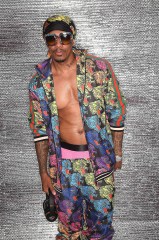 But over a month after that interview, Nick revealed that he has no plans to have more kids — for now. “Im not sitting out here planning it. My therapist says I should be celibate,” he told Entertainment Tonight. “Ok, give me a break bus. I’m [gonna] take a break from having kids.”