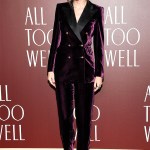 Taylor Swift understands the fall dress code all too well. The singer wore a purple velvet suit to the premiere of her short film, ‘All Too Well.’

Autumn is the season for velvet — and Taylor Swift knows this all too well. The singer, 31, attended the premiere of her short film All Too Well, pegged to the 10-minute song of the same name from her recently released Red (Taylor’s Version), in the ultimate fall ensemble: a dark purple velvet suit.

The velvet suit is complete with black lapels and regal gold buttons. The Grammy winner finished the look with pointed toe boots and dark red nail polish as she posed on the red (or, technically black) carpet at the AMC Lincoln Square 13 in New York on Friday, Nov. 12 with the film’s stars, Dylan O’Brien and Sadie Sink.

Sadie, who last starred as Max Mayfield in the Netflix hit Stranger Things, also held her own on the black carpet. The 19-year-old wore stylish white flared pants with a black crop top, while Dylan opted for a cozy forest green sweater. The two will star opposite each other in the short film, set to be released on YouTube on Friday at 7 p.m. EST. At the premiere, Taylor even surprised fans with an acoustic performance of the 10-minute song. 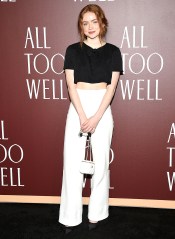 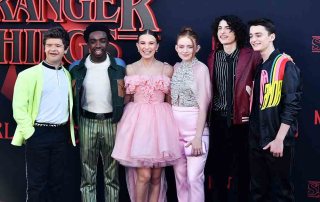 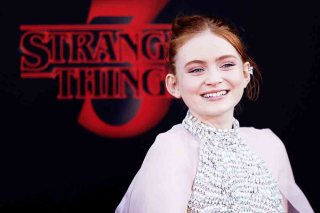 Taylor wrote, directed, and will also star in the short alongside Dylan and Sadie. While on Late Night with Seth Meyers a day ahead of the premiere on Thursday, Taylor said she created the project with Dylan and Sadie specifically in mind to star, admitting that she probably would not have made the film if they turned down the role.

She continued, “I do like working with friends or people who I think would be excited about working with me. I don’t really want to have to convince someone. . . I’ve never made a short film before. I’ve directed some music videos, but I kind of needed to reach out to people who were like, who would maybe believe I’d be capable of it. And Sadie got it immediately. Dylan was like, ‘Yep.'” Taylor said her muses “acted their asses off.”