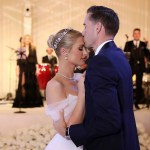 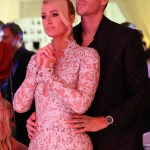 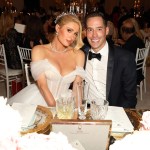 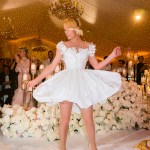 Paris Hilton may be sliving her best life at the moment, but she’s also living her best Simple Life! The 40-year-old bride celebrated her recent nuptials to Carter Reum with numerous celebrities in attendance, including one Nicole Richie, aka her former co-star on the iconic show from the early 2000s. The friends, according to PEOPLE, were seen “laughing and smiling” together on the dance floor at Paris’ wedding reception, posing for photos on a night never to forget.

To complement the new bride’s Ghalia Lav white bridal gown (one of four dresses she wore for the reception), Nicole wore a sleeveless tiered black dress, topping the look off with a low messy bun and boho chic jewelry.

Paris and Nicole made their debut on the small screen with 2003’s The Simple Life on Fox, slugging away at low-wage labor and farm life for the first time in their lives. The show, which attracted millions of viewers, ended its run after five seasons on E! in 2007. Although fans loved seeing the friendship between the two heiresses, they had a brief falling out in 2005. Luckily, they mended their friendship since then, and continue to share beautiful moments like this one together. 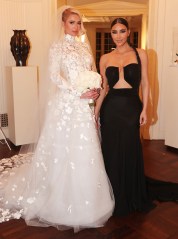 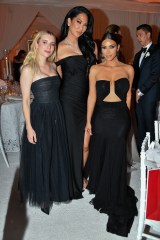 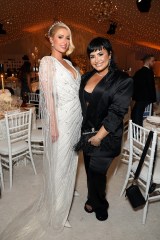 Nicole, of course, wasn’t the only well-known name at Paris’ star-studded event. Other guests included Emma Roberts, Paula Abdul, Rachel Zoe, and Kim Kardashian — who dutifully helped straighten her bestie’s long dress train. Also in attendance was pop star Demi Lovato who received a standing ovation at the reception when they delivered a rendition of Dolly Parton‘s classic love song, “I Will Always Love You.” Singer Kim Petras also performed at the event, kicking off the celebration with a slowed down version of Paris’ hit song, “Stars Are Blind.”

Paris and Carter got engaged in Feb. 2021 after one year of dating. Since then, the couple has had a ton of celebrations for their big day. Aside from her bridal shower, Carter and Paris also had a joint bachelor and bachelorette party in Las Vegas where they were surrounded by friends and family.