Bella Thorne just dropped her super sexy video for ‘In You’ with Juicy J, which featured her rapping!

Bella Thorne, 24, is rapping on her new track with Juicy J, 46! The Disney alum wrote and directed the accompanying four minute video, which includes plenty of PDA with a female love interest that also happens to be seeing Juicy. The two ladies are featured in various set ups through the video, released on Nov. 4, including a bedroom and nightclub.

In one scene, the stunning red head rocks a lingerie set as she and her lover — also clad in black lingerie — pose on a bed. At one point, Bella appears to be giving her oral sex. In a later scene, they nearly lock lips in a nightclub as they dance seductively and take selfies.

The lyrics, however, reflect Bella’s confusion over the relationship as the woman seemingly doesn’t respond to her calls or texts.  “I miss you when I’m in you (In you)/
Tell me why wе can’t continue? (‘tinue)/No reply to the texts I sent you/No regards to the s— we been through,” she raps. 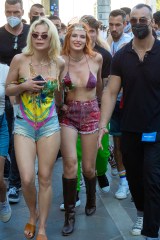 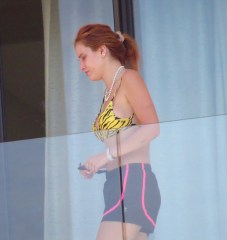 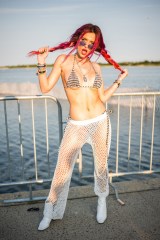 She then ponders if the girl really “loves” her (as does Juicy). “Do you really love me? (Ooh)/Or it’s nothin’? (Ooh)/Only time you say you love me (Ooh)/Is when we f——-’ (Ooh),” she says in the chorus. Juicy is experiencing the same ordeal with her because, of course, they’re being two-timed. In an office scene, it’s revealed that Juicy and Bella work together. The Shake It Up actress calls the woman during a brief pause from the music, exclaiming, “She sent me to voicemail! That’s really messed up!”

Bella, who is engaged to Benjamin Mascolo, has previously opened up about being pansexual. “I’m actually pansexual, and I didn’t know that…Somebody explained to me really thoroughly what that is,” she said on Good Morning America back in 2016. She went on to detail that means she sexually favors someone’s personality more than their physical body. “You like beings. You like what you like. Doesn’t have to be a girl or a guy or a he or she or they or this or that. It’s literally you like personality. You just like a being,” she added. Bella previously came out as bisexual in 2016.