There’s nothing cuter than a mother/daughter Halloween costume! Cardi B and her three-year-old, Kulture, wore matching witches outfits in 2021.

Cardi B twinned with her adorable daughter, Kulture, on Halloween 2021. The rapper took to Instagram to share photos of their witch costumes. The mom/daughter duo wore matching black dresses along with black gloves and capes. They had on witch hats and carried broomsticks to pose for photos in their looks. Kulture even had dark makeup put on her eyes to ad some fierceness to the spooky look. Meanwhile, Cardi had silver eyes and dark mascara for her glam look.

“We put a spell on you and now you’re ours,” Cardi captioned a series of photos of herself and the three-year-old. She also thanked designer Garo Sparo for designing the dresses that they wore for the costume. “The enchanting Cardi B in a custom corseted witch costume tonight complete with crystal encrusted gloves,” Garo revealed on Instagram. “Thank you so much Kollin Carter for having us dress her! More pics to come.”

There was no sign of Cardi and her husband, Offset’s, second child in any of the Halloween photos. Cardi gave birth to the baby boy at the beginning of September, but she and Offset have made a point to keep him out of the public eye. So far, they have yet to reveal the little one’s name and have not shared any photos of him.

Despite having a baby less than two months ago, Cardi has definitely been keeping busy. By the end of September, she had already flown to Europe to attend Fashion Week events. At the time, haters accused her of having surgery to get her body back after giving birth, due to the fact that she looked so good in paparazzi photos from the trip. However, Cardi was quick to shut down any speculation. 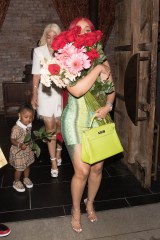 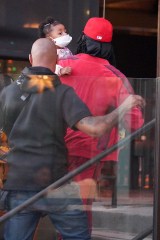 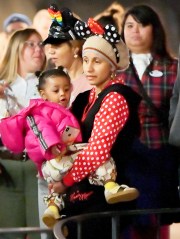 “Everybody’s like, ‘Cardi, you so snatched. What do you do? You did lipo? You had a tummy tuck?’ You cannot do surgery after you give birth, especially me,” she insisted. She also revealed that she had an intense experience while giving birth to her second child. “One day, I’m going to talk to you guys about my crazy ass delivery,” she said. However, she has yet to divulge the details.