Chrissy Teigen and John Legend shared awesome pics of their brood dressed as ‘The Addams Family’ for Halloween as well as a fun-loving video of John playing the epic theme song while Luna joined in on the stomping.

Chrissy Teigen, 35, and John Legend, 42, are kicking the weekend off with awesome Halloween costumes! The model and singer both took to Instagram to reveal their version of The Addams Family, which included themselves as well as their two kids, Luna, 5, and Miles, 3. Chrissy took on the role of Morticia Addams and John dressed as Gomez Addams while their daughter portrayed Wednesday Addams and their son portrayed Pugsley.

Chrissy’s mom Vilailuck “Pepper” Teigen also joined them in the role of Grandmama and an unidentified person dressed up as the famous Cousin It.

Chrissy’s posted pics are black and white and shows all of them sitting and posing just like the members of the family in the popular 1938 cartoon and the 1991 movie. She also posted a selfie of her, John and the kids still in costume while hanging out outside. “john. why did you do the cartoon gomez 😭,” she cheekily captioned it.

John posted a video of the brood, minus little Miles, all dressed up and standing around him as he sat at a piano and played The Addams Family theme song. Chrissy leaned on the piano in her long black dress and gave off a serious facial expression just like Morticia would do as she stood near Vilailuck and Luna, dressed in a black dress and braids, stood in the back with the person who was dressed as Cousin It as she periodically stomped one foot in tune with the beat. “Addams Family rehearsal going beautifully,” he captioned the video. 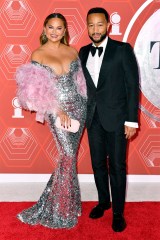 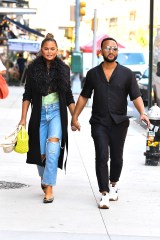 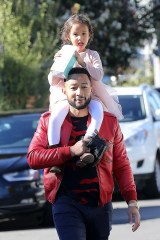 The “All Of Me” crooner also posted a selfie of him and Luna posing together as the tot kept a serious facial expression. “She insists on staying in character for all photos. No smiles for Wednesday,” he wrote alongside the snapshot. The pics didn’t end there either. He showed off a photo in which he was sitting back in costume and giving eye to the camera as he drank a canned beverage from La Vie. “La Vie has a new celebrity spokesperson. Gomez is a man of exquisite taste,” he wrote.

It’s unclear whether or not Chrissy and John will share another costume before the holiday on Sunday, but this one was one for the books!