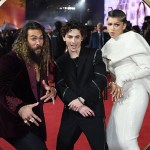 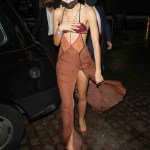 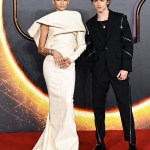 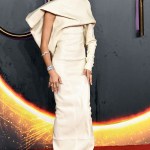 Zendaya arrived in style for the premiere of the sci-fi epic, where she stars as Chani, alongside other A-list actors like Timothée Chalamet.

Zendaya looked like she could take over the galaxy with how beautiful she was at the London premiere of Dune on Monday October 18. The 25-year-old actress rocked an eye-catching, light tan gown to the premiere of the film adaptation of the science fiction fan favorite. The actress looked absolutely out of this world, as she also had her hair combed in a way that made it look incredibly short at the premiere, and her eye makeup was completely on point!

Besides the beautiful, flowing gown, Zendaya also accessorized with a variety of jewelry, both with rings across her fingers and bracelets on her right wrist. The dress elegantly draped off the actress, as she posed for photos on the red carpet. Besides the pictures of just her, Zendaya also posed alongside her co-stars Timothée Chalamet, who she starred as the Chani to his Paul Atreides, and Jason Momoa, who played Duncan Idaho. 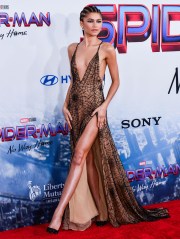 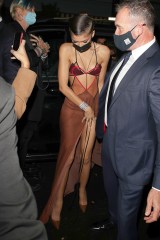 Dune is only one of many starring roles for Zendaya this year. Before the movie adaptation of Frank Herbert’s classic 1965 novel, she also offered her voice to Space Jam: A New Legacy, where she played Lola Bunny. Other than the science fiction tale and animated favorite, Zendaya is also set to star in the upcoming MCU movie Spider-Man: No Way Home, which is expected to hit theaters on December 17.

Speaking of Spider-Man, Zendaya and her co-star Tom Holland, who plays the web-slinging Peter Parker in the Marvel Cinematic Universe, seemed to have gone public with their relationship this past summer, when the two were spotted kissing in a car in July, and the two have seemed so in love ever since. She raved over her beau and how he took up the Spider-Man mantle in an InStyle interview earlier in October. “In an actor way, I appreciate that he really loves being Spider-Man. It’s a lot of pressure — you take on the role of a superhero wherever you go. To the little kid who walks by, you are Spider-Man. I think he handled that so well,” she said.