Ryan Reynolds, 44, gracefully turned a negative situation into a positive one on Sept. 21, when he responded to Gerard Butler‘s shady comment in the classiest way ever.

While speaking to UNILAD, Gerard, 51, touched upon his 2009 movie Gamer and how the public responded to it. And while doing so, he was asked about the current comparisons of Gamer to Ryan‘s current movie, Free Guy. “I actually don’t know what Free Guy is,” he said in the most Mariah Carey “I don’t know her” way ever — but when the answer was whispered to him in his ear, he took a direct shot at Ryan by saying, “Oh sh** is it… I don’t watch Ryan Reynolds movies.” 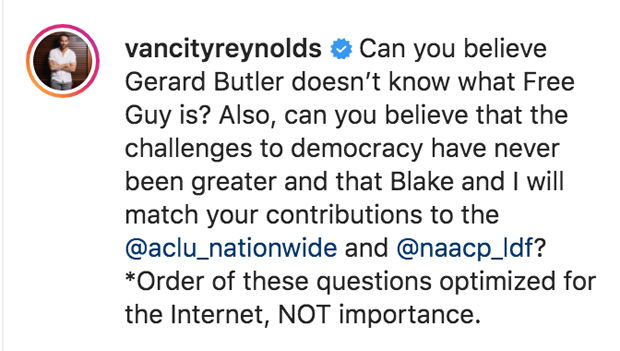 Ryan, who is known for playfully trolling fellow celebrities, including his own wife Blake Lively, later caught wind of the shady comment and took to social media to respond.

“Can you believe Gerard Butler doesn’t know what Free Guy is? Also, can you believe that the challenges to democracy have never been greater and that Blake and I will match your contributions to the @aclu_nationwide and @naacp_ldf? *Order of these questions optimized for the Internet, NOT importance,” he wrote on Instagram next to an image of an article highlighting Gerard’s diss, while also calling on a donation to the NAACP Legal Defense Fund and ACLU.

Ryan also took to Twitter and highlighted a tweet from the Legal Defense Fund, in which the organization thanked him and Blake for their generous contributions.

If you ask us, we think it was pretty clever of Ryan to take advantage of the attention Gerard’s comment is receiving and putting it to good use. Bravo, Ryan!

Related: Ryan Reynolds’ Wife: All About His Marriage To Blake Lively & Past Relationships

Gerard Butler has yet to respond to Ryan’s philanthropic reaction.