Elizabeth Hurley, 55, looked absolutely stunning for a soirée in London. The Estée Lauder spokeswoman channeled a peacock with a plunging metallic blue-and-green gown as she stepped out for David Walliams‘ 50th birthday party, which was held at the ritzy Claridge’s Hotel on Saturday, Sept. 4. The Retrofete dress featured a dramatic deep-v plunge and belt detail, showing off her body shimmer and large diamond necklace as she posed for photographers outside.

Liz finished the look with a matching metallic clutch, which she held in her left hand, as well as a bold platform sandal, also in the same metal tone. She added a pop of burgundy for a fall-ready pedicure, along with a dash of glitz with her diamond hoop earrings. The swimsuit designer’s skin was glowing as she smiled outside, opting for her usual nude glossy lip and sexy smokey eyeshadow.

The Austin Powers alum is known for her love of risqué gowns, including the Versace one that put her on the map way back in 1994. The then 29-year-old sported an unforgettable safety pin dress with a deep plunge to the Four Weddings and a Funeral premiere with former boyfriend Hugh Grant, 60. “I was so unprepared for what happened that night,” Liz recalled in an interview 25 years later with Harper’s Bazaar, accompanied by a photoshoot in a modern take of the dress. Several stars have paid tribute to the look over the years, including Lady Gaga and Jennifer Lawrence. 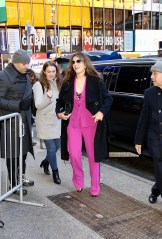 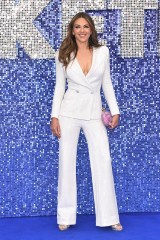 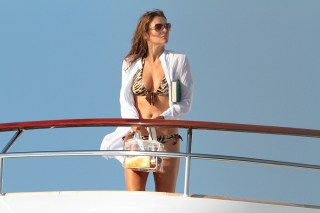 “I urgently needed to find a dress to wear for Hugh’s premiere, and in those days I had no idea about fashion,” she explained of the moment.  “I remember going to an office where they literally fished a dress out of a white plastic bag…I took it home and did my own hair and makeup, fighting Hugh for the mirror, which wasn’t even full-length, in our tiny one-bedroom flat. It was all very unglamorous compared to how things get done these days,” she hilariously added. Even at 55, Liz barely looks like she’s aged a day!