Kourtney Kardashian looked incredible when she stepped into a vehicle while wearing a sleeveless sheer dress as a dapper-looking Travis Barker followed behind her.

Kourtney Kardashian, 42, and Travis Barker, 45, took their romance to a ritzy party in Venice, Italy on Aug. 29 and looked fashionable while doing so! The Keeping Up with the Kardashians star and Blink 182 drummer were photographed making their way to a Dolce & Gabbana event and got into a brown vehicle while showing off their eye-catching looks. She led the way in a sheer black and pink patterned sleeveless dress and clear heels while he followed behind in a black blazer and pants.

Once Kourtney sat down in the car, she was seen looking on Instagram on her phone, proving she’s still making it a priority to be up to date with social media. It’s not entirely clear what she was looking at but it appeared to be a pic that looked like her and Travis walking side by side.

The lovebird’s latest Italian outing comes shortly after they were spotted passionately kissing on a boat during a romantic ride in the water. Kourtney flaunted her fit figure in a black Gucci thong bikini while Travis went shirtless with his tattoos on full display. They were as close as could be as their arms were wrapped around each other and definitely looked so in love!

Kourtney and Travis were also spotted taking part in PDA during an outing in Italy on Aug. 27. They didn’t hesitate to look into each other’s eyes and smooch with their mouths open and were all smiles the entire time. They also stopped to get ice cream cones and held hands while walking and enjoying the sweet treats. 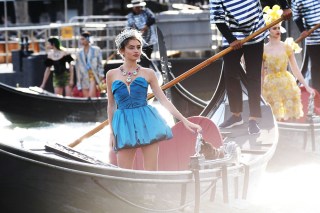 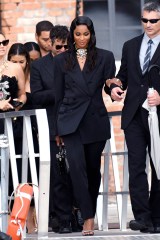 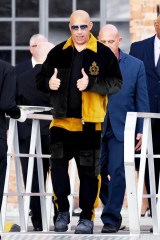 Before the good-looking duo stopped in Italy, they spent some quality time in Cabo San Lucas, Mexico after arriving on a flight that was Travis’ first since he was involved in a deadly plane crash in 2008. He later took to Instagram to share a gorgeous photo of him and Kourtney embracing in front of the plane they took with the caption, “With you anything is possible.” What a summer these two have had!