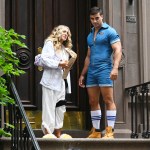 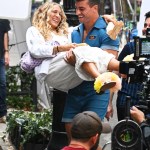 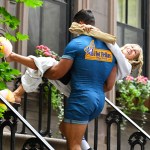 The fabulous trio! The ‘Sex and the City’ revival, ‘And Just Like That,’ is now filming and HBO Max has released the first photo of SJP, Cynthia Nixon, and Kristin Davis back on set as their characters.

And then there were three! Sarah Jessica Parker, Cynthia Nixon, and Kristin Davis are back in New York City together, and all feels right in the world. In honor of the Sex and the City revival — officially titled And Just Like That… — starting to film in the Big Apple, the first photo of the beloved characters has finally been revealed.

Carrie, Miranda, and Charlotte are walking together on a New York City street. They look confident and fierce as they make their way through the concrete jungle. However, there’s one major thing missing: Samantha Jones. The famous quartet has become a trio since Samantha is not returning for the revival.

This next chapter for the Sex and the City ladies will be one without Samantha. Kim Cattrall is not reprising the iconic character for this revival. When the revival was announced in January 2021, SJP responded to a fan who commented that she and Kim “dislike” each other.

“No. I don’t dislike her,” Sarah said at the time. “I’ve never said that. Never would. Samantha isn’t part of this story. But she will always be part of us. No matter where we are or what we do.” Kim has not publicly spoken out about the revival, and HBO Max has not revealed how Samantha’s absence will be address in the upcoming series.