Megan Fox was not being shady when she left an unexpected comment on Brian Austin Green‘s recent PDA pic with his girlfriend, Sharna Burgess, the former Beverly Hills, 90210 star revealed on July 7.

“For people that need or want clarification. Megan and I get along great. Neither of us are sending petty digs to each other. We both work really hard to get along and coparent well for our kids. Now stay safe and spread kindness and love,” Brian, 47, wrote on his Instagram Story on Wednesday, July 7. 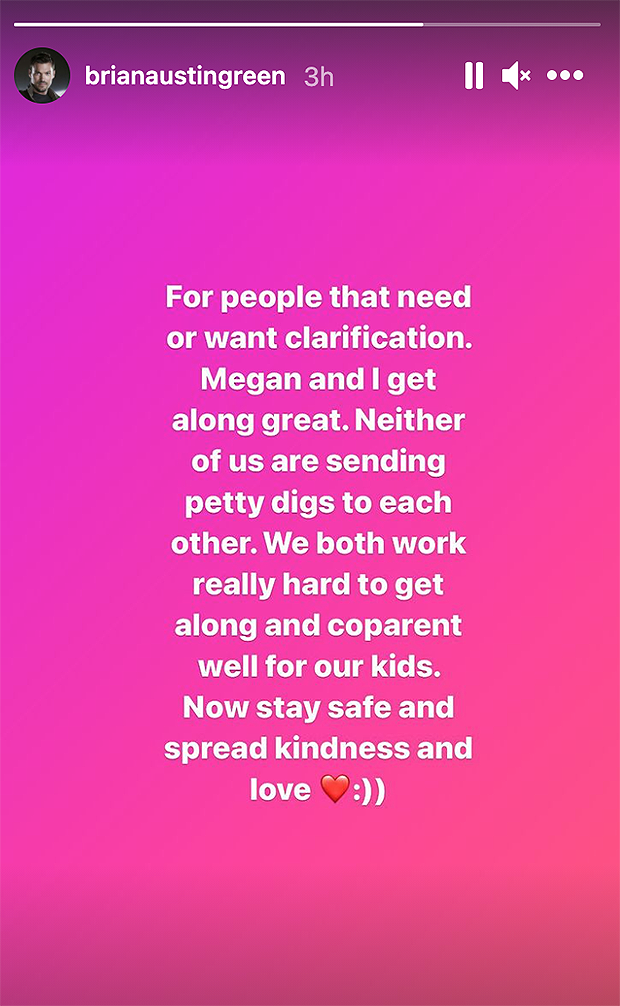 The speculation started after Brian posted a photo of him kissing Sharna at Walt Disney World on July 6 (seen below). “It’s been a really long time since I’ve been with someone I can truly share life with,” he captioned the shot on Instagram.

Some thought Brian’s caption was a dig at his ex, Megan, but she seemingly showed her support in the comments, when she wrote, “Grateful for Sharna”. Sharna even replied with two white heart emojis.

However, at the time, it was unclear whether Megan’s comment was sincere or shady. “He tried to throw shade, and Megan said, ‘Not today, sir,’” one commenter wrote under the photo and her comment, which she later deleted. Another commenter said they “doubt[ed] it was sincere”, but as you can now see, Brian has squashed that theory.

Brian and Megan, who’s now dating Machine Gun Kelly, split in March 2020 after ten years of marriage. And even though they currently “work really hard” to co-parent their three kids — Noah, 8, Bodhi, 7, and Journey, 4 — they haven’t always gotten along with each other. So we’re certainly happy to hear they’re now getting along great.