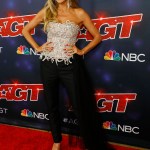 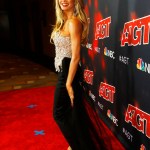 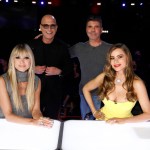 ‘AGT’ changed things up in the final moments of the July 6 episode. A 9-year-old opera singer wowed the judges so much they gave her the show’s first-ever group Golden Buzzer.

The latest Golden Buzzer winner on America’s Got Talent is unlike any other. Nine-year-old Victory Brinker is the very last audition of the July 6 episode. She seems shy at first, but her voice is anything but that. Victory shows off her gorgeous vocals as she sings an opera classic.

Howie Mandel calls her “angelic.” Sofia Vergara raves, “You’re a star.” Simon Cowell asks to bring Terry Crews over. They start whispering at the judges’ table, and Victory is clearly wondering what’s wrong. “We’re not going to give you a ‘yes’ today,” Simon tells Victory. The crowd begins to boo.

He says they’re going to do something they’ve “never” done before. The judges and Terry ALL decide to push the Golden Buzzer together. Victory begins to cry and runs to her mom. She just made AGT history!

The July 6 episode features a number of standout performances. Twirler Joel Claudio is the first act to perform. His performance gets a standing ovation from the judges. Simon gushes over his “fantastic personality.”

YouTuber Madilyn Bailey sings an original song made from the hate comments on her YouTube videos. Her song is definitely unique, but there’s no denying she has a great voice. However, Heidi is left “torn” over what to do. Meanwhile, both Sofia and Simon are excited about Madilyn.

Singer Donovan’s dream is to be a Broadway performer. He sings a gorgeous rendition of “Think of Me” from The Phantom of the Opera. Sofia admits Donovan’s voice was “super unexpected.” Simon loves Donovan’s “amazing voice.”

Matt Mauser takes the stage and reveals his late wife, Christina Mauser, was one of the victims of the helicopter crash that also killed Kobe Bryant. They were married for 15 years and had 3 children together. Matt performs an emotional rendition of “Against All Odds” by Phil Collins. At the end of the performance, Matt begins to cry. Heidi Klum is left in tears.

Matt tells judges that the reason he came on AGT is because he wants to “make sure that my children see that, in spite of the grief that we’ve been through this year, that that grief is not going to define who we are as a family.” All 3 kids come out to hug their dad. After the performance, Matt reveals that he was “singing” to Christina.

Cam Bertrand cracks the judges up with his stand-up routine. He has both Howie and Heidi cackling pretty much the entire way through his act. Howie tells Cam that he’s “really funny” and sees a “real future” for him in comedy. Cam calls his mom after getting a “yes” from all 4 judges and begins to cry!