Travis Barker is very into the sexy new photos that Kourtney Kardashian posted on Instagram. For the pics, the mom of three wore a tight black top and a mini skirt, striking a variety of poses for the camera, which was placed on her floor. One shot even showed Kourt from just the waist down, and in another, she popped her booty and made a duck face for the camera.

Travis proved that he was feeling the photo shoot by commenting with a sweating face emoji. Kourtney caught wind of his message and responded with a tongue emoji. These two are definitely not shy when it comes to flirting on social media like this, and they were definitely at it once again! Kourtney and Travis, who have been longtime friends, went public with their romantic relationship in January and have been hot and heavy ever since. Earlier this week, they were even spotted making out in public without a care in the world! 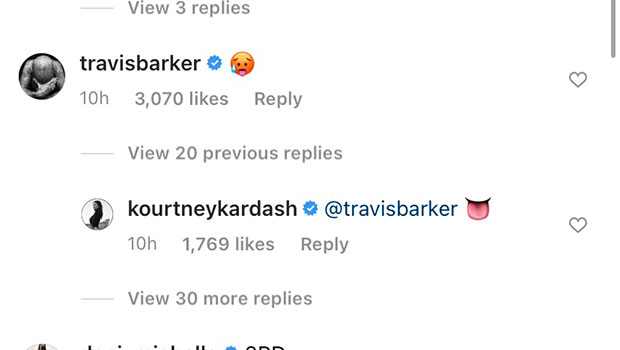 Meanwhile, Kourtney’s mom, Kris Jenner, weighed in on the relationship for the first time in an interview with Ryan Seacrest on June 10. “Isn’t it great?” she gushed. “It’s the best!” Kris was also asked to comment on the cryptic photo that Kourtney posted earlier this week of a vial of Travis’s blood, and admitted that even she was in the dark about it. “I don’t know what that means,” she explained. “I’ve got to have a little chat with Ms. Kourtney and find out what’s going on.”

Kourtney was famously in a relationship with Scott Disick for nearly 10 years before their 2015 split. The exes remain on good terms and share three kids together. After Scott, she dated Younes Bendjima, who’s 13 years her junior, for more than a year. However, she has much more in common with Travis, who is 45 and has two kids of his own. Travis shares his daughter, Alabama, 15, and son, Landon, 17, with ex, Shanna Moakler.