For those who didn’t check out the premiere of The Sherry Vine Variety Show on the OUTtv Apple TV Channel, the opening seconds of HollywoodLife’s EXCLUSIVE preview of episode 2 sums up what you’re in for. A frizzed-out and American flagged-out Jackie Beat rushes into the scene to speak with Sherry Vine, dressed in her complete The Sonny & Cher Comedy Hour/Carol Burnett Show lemon fantasy. “Hey, Sherry. I’m sorry to interrupt, but I have a question,” says Jackie. “Yes, Jackie?” “Are you a complete moron?” asks Ms. Beat. “Well,” says an exasperated Sherry. “Well, I’ve been working with you for thirty years, so yes, I must be!”

From there, as Sherry sings the next great earworm (“Hey, hey / your boyfriend’s gay! / You’re the last one to know”) as we get a glimpse of what to expect when the episode airs on June 1: Bianca del Rio as a French-looking barista; Bob the Drag Queen delivering some news that leaves Sherry shook; an appearance by Ugly Betty and Desperate Housewives star Alec Mapa; and a phone call from Monet X Change that Sherry doesn’t want to take.

“The highlights of Episode 2 for me are; Bianca del Rio and I treating Jackie Beat like dirt — c’mon, she deserves it! — Bob The Drag Queen and I dishing about large penises with Alec Mapa and Monet X Change reading me for filth – all in the spirit of sisterhood!” Sherry shares with HollywoodLife. “Filming with your best friends adds the gift of non-stop laughter!” The feeling was mutual for Bob, who tells HollywoodLife that it’s “always an honor to work with a legend like Sherry Vine. And we always say yes because…you know…this could be her last show.”

“I’m thrilled to have been a part of this fun project by my hilarious and incredibly talented old, old, old friend, Sherry Vine!” adds Biana del Rio. “Compared to an abortion, this was fun! The skits are rotted and hysterical. Everyone with a sense of humor needs to watch this show.”

As one of your favorite drag performer’s favorite drag performer, Sherry has brought her love of the classic variety shows of the 1970s to OUTtv’s new Apple TV channel. The Sherry Vine Variety Show captures the camp and crass, the glamour and gross, the humor and heart that has been Sherry’s specialty since she put on a wig. The weekly, half-hour show will feature special appearances from stars like Candis Cayne, Mario Diaz, Nadya Ginsburg, and some of the world’s best drag performers like Alaska Thunderfuck, Peppermint, Tammie Brown, Varla Jean Merman, and more. 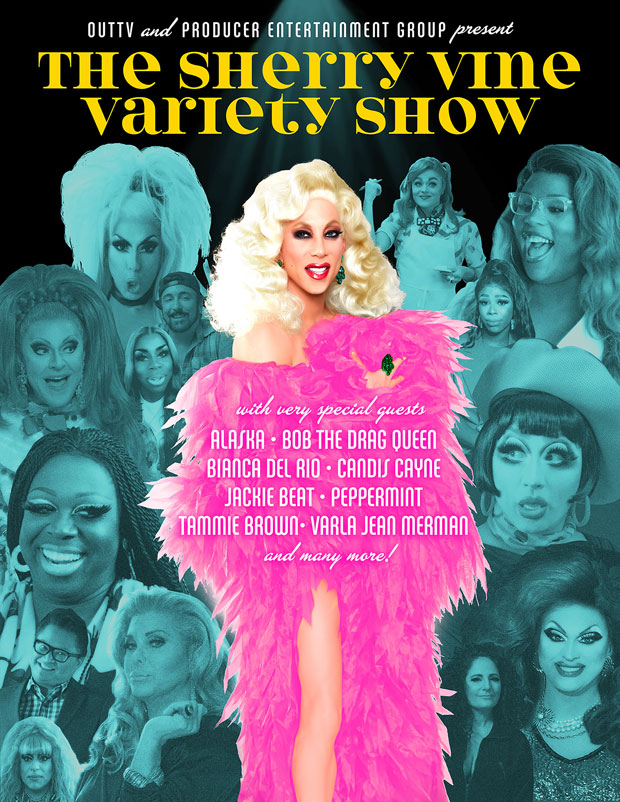 The Sherry Vine Variety Show is available exclusively on the OUTtv Apple TV Channel HERE in the US and Canada, OUTtvGo.com and the OUTtv Amazon Prime Channel in Canada, and FROOT.tv in the UK and Ireland.

Related: ‘Dexter: New Blood’ Season 2: The Latest On Whether Or Not It’s Happening