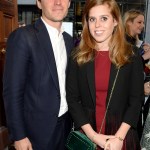 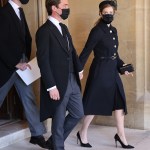 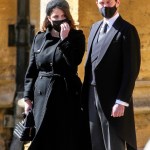 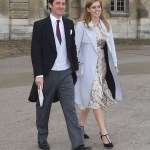 Princess Beatrice‘s baby bump has entered the spotlight! The 32-year-old member of the British royal family stepped out with her bump in tow for the very first time ever on May 19, which was the same day Buckingham Palace announced that Beatrice would be expecting her first child with her husband of one year, English property developer Edoardo Mapelli Mozzi, 38. The expecting parents were pictured together smiling while taking a stroll in London, which you can see in the photos linked here.

Beatrice inherited her grandmother’s sense of style; Queen Elizabeth’s granddaughter made her baby bump debut wearing a colorful purple dress that she layered with a posh black button jacket. Beatrice completed the ensemble with black tights and buckle booties, ideal for the rainy weather that the U.K. is currently experiencing.

Beatrice will be wearing similar clothes by the time her child arrives. The future royal will be a fall baby, which Buckingham Palace revealed in its pregnancy announcement on May 19. “Her Royal Highness Princess Beatrice and Mr. Edoardo Mapelli Mozzi are very pleased to announce that they are expecting a baby in autumn of this year,” the statement read, which added, “The Queen has been informed and both families are delighted with the news.”

This news is especially exciting, considering that the baby will be grandchild No. 2 for Beatrice’s parents Prince Andrew and Sarah Ferguson. Meanwhile, Beatrice’s first child will mark the Queen’s 11th great-grandchild.

This is not only a wonderful development for the royal family, but for Beatrice and Edoardo as a couple as well. Beatrice met Edoardo, who founded the real estate firm Bando, in 2018 and became engaged by Sept. 2019. The COVID-19 pandemic postponed their plans for a grand wedding in May of 2020, so the couple instead tied the knot during a private ceremony at the Royal Chapel of All Saints in Windsor on July 17, 2020. This means the baby is arriving right after their one-year wedding anniversary! While this will be the couple’s first child together, Edoardo has a a four-year-old son, Wolfe, whom he shares with his ex-fiancée Dara Huang.