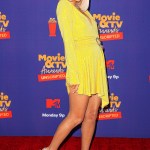 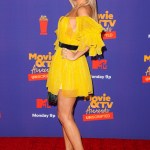 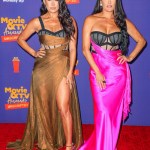 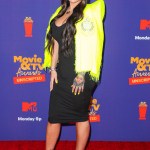 Erika Jayne looked like a rock star in an electric blue latex dress and coat, which the ‘RHOBH’ star wore to present at the 2021 MTV Movie & TV Awards: Unscripted.

Like the name of her famous song, Erika Jayne looked expensive as she posed on the red carpet for the 2021 MTV Movie & TV Awards: Unscripted show. The 49-year-old Bravo star rocked a mini latex dress under a ground-grazing trench coat, which were both designed with the same electric blue, tie-dye color and pattern. The Real Housewives of Beverly Hills star posed outside the Hollywood Palladium in deep blue pointed heels to complete the colorful outfit, which complemented her platinum mermaid waves.

Although the “Unscripted” show aired on May 17, Erika actually wore this latex ensemble while filming the award show on May 14. She was joined by other reality TV royalty like Jersey Shore stars Nicole “Snooki” Polizzi, Jenni “JWoww” Farley and Angelina Pivarnick, in addition to Selling Sunset stars Mary Fitzgerald, Chrishell Stause, Christine Quinn and Heather Rae Young, since the “Unscripted” show focused on reality television. We’ll be seeing Erika rock designer items like the one above on our television screens soon, too, because Season 11 of RHOBH is premiering on May 19. Unlike past seasons of the Bravo show, Erika will be single in this one after she filed for divorce from her husband of 21 years, Tom Girardi, in Nov. 2020.

“This season of RHOBH will heavily revolve around Erika. Her divorce will be heavily covered and it’ll be the main drama of the entire season,” a source close to the RHOBH cast EXCLUSIVELY told HollywoodLife in March of 2020. The insider added, “[Erika’s] not holding anything back. Whatever she can legally say, she’s saying it. You’ll see Erika crying and getting very emotional, definitely.”

Erika’s legal drama will also be highlighted on the new season, which the RHOBH Season 11 trailer revealed in April. A law firm accused Erika and her now estranged husband of embezzling money from settlements in connection to the Lion Air Flight 610 crash, which led to the court freezing Tom’s assets. “No one knows the answer but him,” Erika told her co-stars in the preview, insisting her innocence in regards to the money scheme. Since the split, Erika ha moved into her own place: a three-bedroom, two-bathroom home that was valued at $1.5 million, according to People.