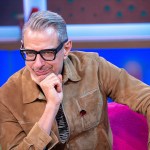 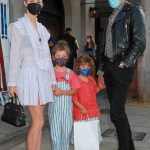 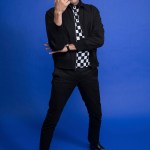 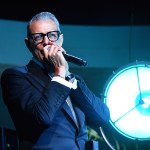 Jeff Goldblum and his wife Emilie took their two sons for a dinner outing in Los Angeles on the evening before Mother’s Day and they all looked stylish while posing for photos outside the restaurant.

Jeff Goldblum, 68, and his wife Emilie Livingston, 38, stepped out with their two sons Charlie, 5, and River, 4, to celebrate Mother’s Day early on the night of May 8! The family-of-four was all dressed up and looking as cute as could be while standing outside of Craig’s restaurant in Los Angeles, where they dined for the night out. Jeff donned a black leather jacket over a black and white patterned button-down shirt, black pants, and black shoes while Emilie wore a white sheer mini dress with black polka dots and ruffles and black strappy heels.

Charlie showed off white overalls with blue stripes over a red shirt. He added bright green and white slip-on shoes to the look as well. River had on a similar outfit that included a red top with black polka dots, white shorts with blue stripes, and blue and white slip-on shoes. The whole family also wore face masks as they held hands and stayed close during the fun outing.

Jeff’s latest dinner date with his family is a headline-making one since he’s rarely seen out and about with his kids, especially. The actor opened up about how he thought he wouldn’t have kids before welcoming his sons, in a 2019 interview with Radio Times, and revealed how his relationship with Emilie, whom he married in 2014, changed that.

“I never thought that I was going to do it. I had never been particularly passionate [about fatherhood] or envisioned it for myself – I don’t have any nieces or nephews, had never seen a birth before,” he said in the interview. “In the couple of lovely previous marriages I had, there was some fantasy talk about it, but never any serious business. And I always thought it was a good thing that I didn’t have any drama with kids and breaking up.”

“We thought about it for a year, talked about it with my therapist, went in together,” he added while referring to Emilie. “After a year of that, I said, ‘Yeah, this sounds kinda good, let’s get married and have kids.”‘