Many hot topics were discussed during Part 1 of The Real Housewives of Atlanta reunion on April 25, including Kenya Moore‘s ongoing divorce from Marc Daly. After Kenya revealed she and Marc are “still in court” because she wants “sole custody” of their daughter, Brooklyn, Kenya revealed a startling new detail about their split. 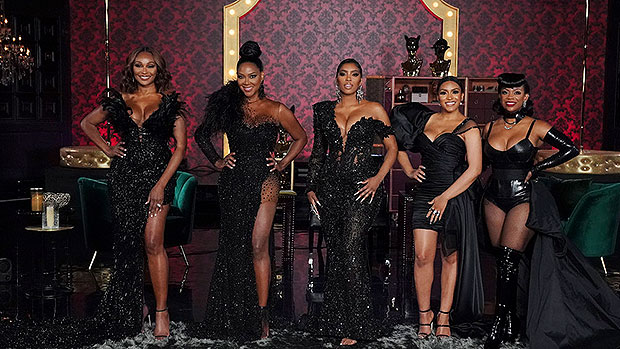 Kenya couldn’t help but laugh about it, and when Andy asked her if she saw it as Mark’s way of “trying to protect” Brooklyn, Kenya said, “No, not at all. Because it has everything to do with his ego. And all of the things that happened with us that trigger him are ego-driven. And that is what turns me off. Because it’s not about the family, and it’s not about what works for us, it’s not about compromise — it’s about [him]. It’s about what happens with [him].”

Still, Kenya said she still sees herself as a married woman and that’s why she still wears her wedding ring. But she did file for divorce and plans to make her split with Mark official once they hammer out details and a judge signs off on it. But in retrospect, she sees how her tattered relationship with her mom leads her to chasing after “destructive” relationships with men. “I’m chasing something that I didn’t get from my mom,” Kenya said.

Later in the hour, Porsha Williams also discussed her own split with Dennis McKinley, and she confirmed they had broken up three times already — she just couldn’t remember why they parted ways. But she did say that she has no plans to reconcile with Dennis. Porsha further told Andy that she’s since been dating again — LaToya Ali even set her up with someone, but the date was “terrible” — as she and Dennis continue to evolve into more of a “family” relationship than a romantic one.

A post shared by The Real Peaches of Atlanta (@realpeachesofatl)

Drew Sidora‘s husband Ralph also revealed what he was really doing in Tampa — he claims that he was only spending time alone to decompress. Drew said she trusts him because she saw restaurant receipts and the guest count said one — she also said she saw tracking from him that showed he was exercising and running around Tampa on foot. For her, that was enough to believe him, but Kandi Burruss is still skeptical. She rolled her eyes when Drew and Ralph were talking, but when Andy pressed her to share how she really felt, she refused. Kandi said she didn’t buy Ralph’s story, but it wasn’t up to her to believe it or not — she said it’s more important to know that Drew believes it.

In other reunion news, LaToya came out in the last few minutes of the episode and started gunning for Drew. She claimed that one of Drew’s friends bursted into her dressing room and harassed her. And even though Drew apologized for the incident and said she knew nothing about it, LaToya didn’t believe her, so LaToya just started verbally attacking her.

Oh, and Drew also shed some tears while confronting Kenya about a tweet she had shared earlier this season. Kenya apparently retweeted a fan’s comment that said Drew’s conversations with her son about his real dad made them cringe. Drew said kids should be off limits when they’re all fighting with each other (either on the show or on social media), and Kandi agreed, but Kenya didn’t really think she did anything wrong.