“We’re growing apart,” Melissa Gorga tells her husband, Joe Gorga, in The Real Housewives of New Jersey midseason trailer that dropped on March 30. Melissa’s fears about her 16-year marriage appears seem to be confirmed by Joe, who snaps back, “Maybe we are!” Melissa ominously reiterates this, saying, “Maybe we are.” This wasn’t the trailer’s only tense scene that hints at doom for these longtime spouses’ relationship.

“I’m not going to give up what I want to do in life. You’re holding me back,” Melissa tells Joe in another scene. He’s not happy to hear this, and drops the axe: “Listen, go be whatever you want to be in life — we’re done.”

This doesn’t mean Melissa wants her co-stars getting involved in their marital business, however. The trailer also shows Joe confronting Margaret Josephs at her Halloween costume party, because the fashion designer apparently called Melissa’s husband a “chauvinistic.” The preview then cuts to Melissa sternly telling Margaret, “I don’t need anybody calling my husband chauvinistic. Because whatever you think I’m dealing with, it’s probably more.” She doesn’t elaborate on what “more” is, however. 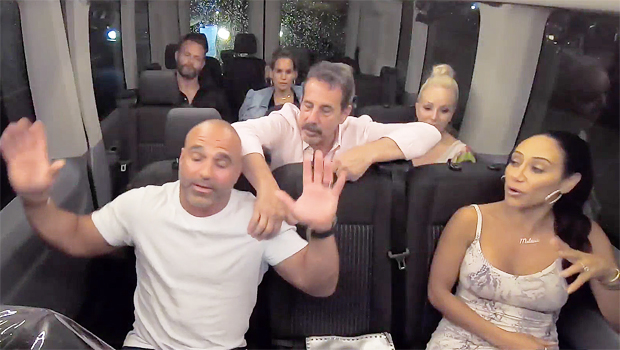 Melissa warned viewers that this marital drama would be unveiled on Season 11, a season that she described as “very raw” and “very real” while speaking to Us Weekly in Feb. 2021. “He likes things to stay the same. I’ve been with him since I was 24 years old. So I’ve changed and I feel like this is a scary part of marriage,” Melissa explained to the outlet. She added, “Either you’re going to grow together or you’re going to grow apart. And I think we’re fighting really hard to grow together.”

“It’s not easy. We’re struggling,” Melissa continued. “I’m not sitting here telling you that, like, I’m moving out of my house today but we were struggling and we show it…We’re fighting out of it.”

While Melissa and Joe’s relationship is looking rocky, they’re still a united family front to this day. In real time, Melissa and Joe recently took their three kids — daughter Antonia, 15, and sons Gino, 13, and Joey, 10 — to the Peak NYC restaurant overlooking Manhattan. Melissa posted photos of the excursion to Instagram on March 21 and gushed over her family, writing, “Ready for another Year. Ready for the climb. Ready for the challenges. Ready for LIFE. Love you all for being ready with me. And this Fam of mine. I could NOT without you [heart emoi].”

Ready to watch the rest of Melissa and Joe’s drama play out? New episodes of The Real Housewives of New Jersey air Wednesdays at 9/8p.m. on Bravo.