Will Hailie Jade Scott Mathers please stand up, because she’s looking like the real Slim Shady in her latest Instagram post. On March 11, the 25-year-old fashion influencer shared a colorful makeup look that reminded fans of her famous dad, Eminem, when he was a rapper-on-the-rise in the early 2000’s! Hailie rocked winged eyeshadow in a bright red shade, a gold chain and black head scarf as though she walked straight off the set for her dad’s 2000 music video, “The Real Slim Shady.”

Fans gave Hailie a new nickname after seeing the post: “Slim Hailie.” Many of Hailie’s other followers also pointed out the undeniable likeness between the Instagram star and her dad. “I CAN’T UNSEE SLIM SHADY NOW,” one such fan wrote, while another commented, “Looking like your daddy what a queen.” A third fan summed it up best: “Early 2000s Shady vibes.” Hailie sounded like she was just as much a fan of this look-alike photo, because she captioned it, “this was on stories but i felt like it deserved a place on the feed.” 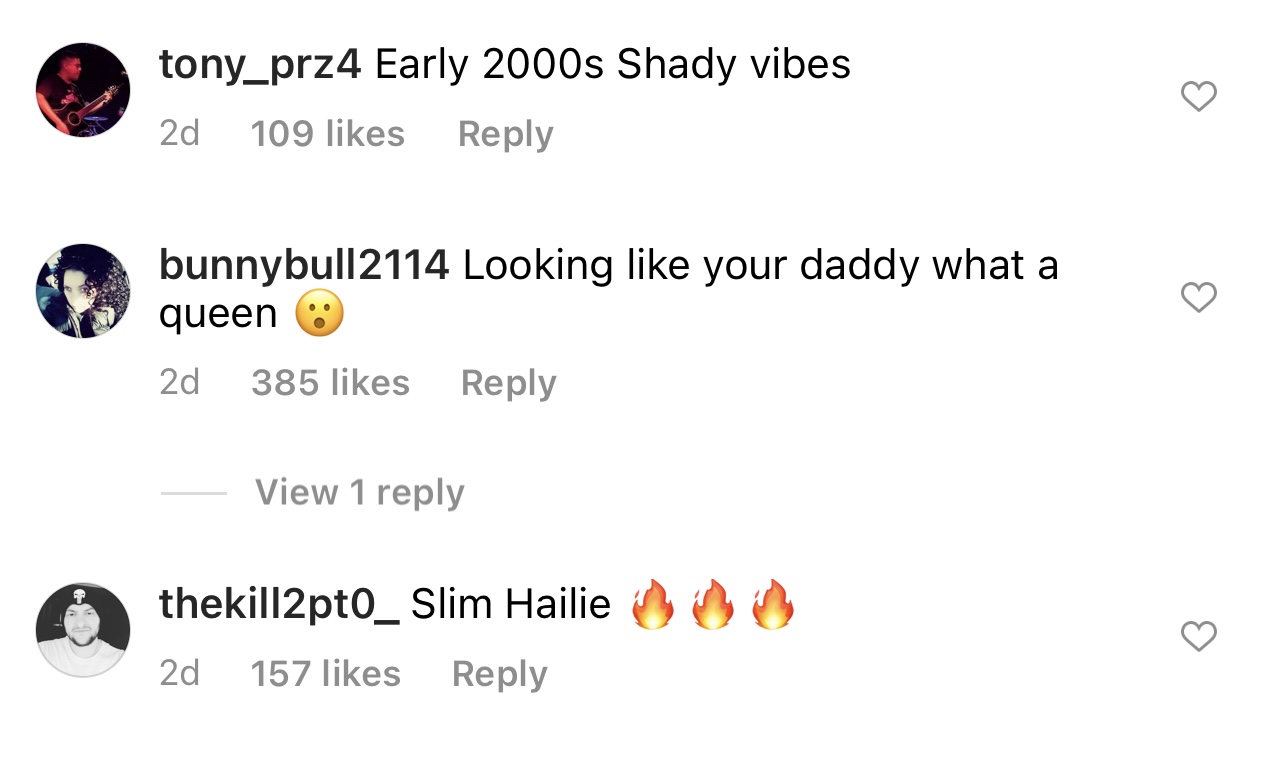 Here’s a fun fact: Hailie was actually featured on one of Eminem’s songs in the early 2000’s. The song was “My Dad’s Gone Crazy,” released in 2002, and Hailie inspired the track herself. “Me and [Dr.] Dre were working together, and Hailie was running around the studio and she was like, “Somebody please help me! I think my dad’s gone crazy!” ‘Instantly that locked in with a beat we’d made the day before. I had her go in the booth and say it. When she opens up, she’s just like her dad in a lot of aspects. I just told her what to say and she nailed it, the first take,” Eminem told Rolling Stone in 2004.

Hailie’s “Slim Shady” outfit was just one of the many fun ensembles Eminem’s daughter has pulled together for her 2.1 million Instagram followers. Take for instance these knee-high boots that Hailie paired a distressed denim jacket for an Instagram post shared on March 4. Meanwhile, she demonstrated six unique ways to rock a blazer in this Instagram video
Related Link

— you’d be surprised at how versatile it is!
Sidebar Content
ad