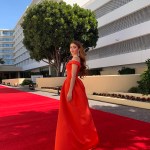 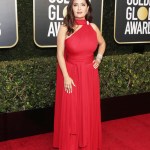 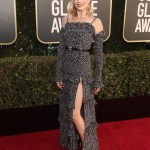 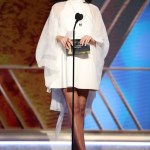 As one of the presenters at the 2021 Golden Globes, Tiffany Haddish dressed to impress in a strapless gown featuring intricate sequins from Alberta Ferretti.

Tiffany Haddish presented at the Golden Globe Awards, but she also deserved an award from the Hollywood Foreign Press Association for her outfit that evening! The 41-year-old comedian looked gorgeous in a metallic gown featuring gorgeous sequin designs from Alberta Ferretti while posing on the red carpet. She wore the same strapless dress to present the award for “Best Animated Feature,” which Soul won at the virtual event on Feb. 28.

Tiffany also showed off her toned physique that evening! In Jan. 2021, the Girls Trip star debuted the results of her “30 day transformation” that she achieved through the 30 Day Transformation Team program in Jan. 2021.

Tiffany joined the many other A-list stars who presented at the 2021 Golden Globes this year, which was a long list: Kenan Thompson, Sterling K. Brown, Awkwafina, Susan Kelechi Watson, Kate Hudson, Margot Robbie, Michael Douglas, Joaquin Phoenix, Kristen Wiig, Catherine Zeta-Jones and Renee Zellweger were among the many household names on the presenters list this year.

This isn’t the first time Tiffany has presented at the Golden Globes — or showed up to the event in a beautiful gown. The actress made a statement at the 2020 award show in Galia Lahav‘s bright pink Chloé gown from the designer’s Belle De Jour collection, but that’s not the only reason she made headlines that year. The famous comedian was also making fans laugh, per usual, by making sure cameras captured her touching up her makeup with a sponge right on the red carpet and later joking about how fans can tell that she’s not pregnant.

Following the 2020 Golden Globes, Tiffany went on to confirm her romance with rapper Common, 48, a few months later in August. “I love him!,” Tiffany declared on Steve-O’s Wild Ride podcast at the time. Their love is still strong, too; the couple recently teamed up to film a steamy couple’s version of the “Silhouette Challenge” on TikTok at the beginning of Feb. 2021!