The Real Housewives of Miami is finally returning eight years after it went off the air, but that doesn’t mean all your favorite OG cast members will be going along for the ride. A show insider told HollywoodLife EXCLUSIVELY that only Marysol Patton is “confirmed to return so far”, while our source added that Season 1 star Larsa Pippen, 46, is “still thinking about [it],” which she confirmed on Instagram on Feb. 23 (see below).

“Larsa’s attorney advised her that it wouldn’t be a good idea [to return to the show], but she’s still thinking about it. She knows it comes with great financial gain, so she’s still on the fence,” our source told us. We weren’t told why Scottie Pippen‘s ex-wife, who only starred on the show during its first season, was told not to return, but fans are hoping she does. And we can only imagine viewers would love watching her new romance with Malik Beasley unfold. Heck, maybe even a Kardashian or two would make a cameo. One could only hope, right? 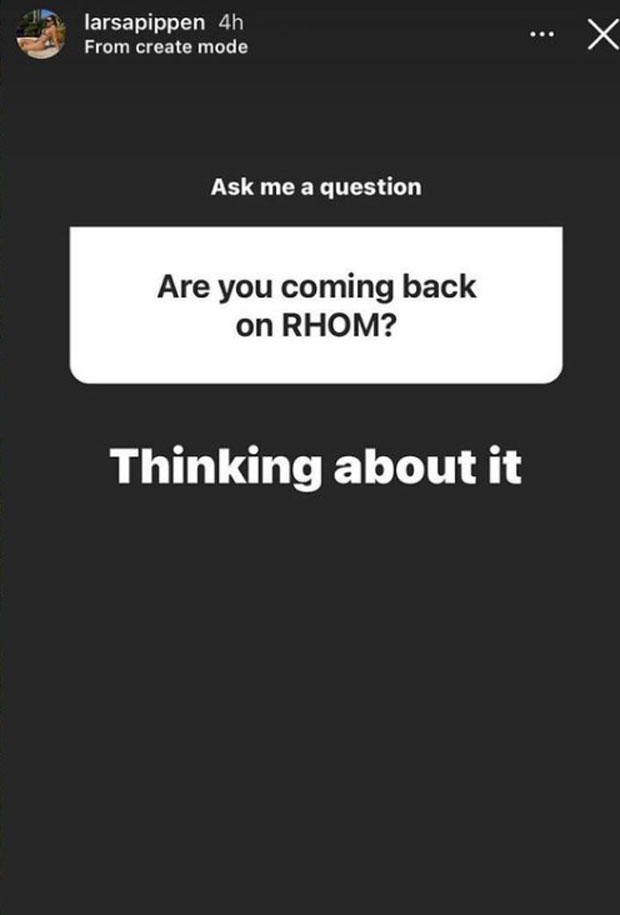 As for the other women who starred on the show throughout its three seasons, our source says, “Lea Black hasn’t agreed [to return] yet, and she doesn’t seem all that interested. [Adriana de Moura] flat out said no, which surprised everyone. Producers are also trying everything to get Lisa Hochstein to come back, as they know she’s a fan-favorite. Producers want a lot of the originals to return. But they’re also looking for fresh talent, as filming will begin at the end of April.”

Joanna Krupa, who joined the show in Season 2, also recently revealed that she wouldn’t be returning to the show. She told TMZ, “In 8 years I have grown a lot as a person and my priorities in life have changed especially after having an amazing little girl. I love to work, I have great and long-lasting TV shows in Poland, and continue doing other projects. Women need to uplift and support each other and I would never at this point in my life consider doing a show that would cause me stress and engage in unnecessary drama. I wish everyone luck and huge success that will be part of the revival.”

Andy Cohen first teased a possible revival of RHOM in Nov. 2020 during an appearance on the “Everything Iconic With Danny Pellegrino” podcast. “I have really been trying to get Peacock to pick up Miami,” the Bravo host, 52, said at the time. “I don’t know if I’m allowed to say this. I don’t know where we are with that.” He further revealed that he’s been an “advocate” for the show’s return for quite some time, and now, it looks like he got his wish.

HollywoodLife reached out to Bravo on this reporting, but they are not commenting at this time.

RHOM aired between 2011 and 2013, with the final episode airing in November of that year. The news of the series’ return — which will air on Peacock, not Bravo — was first reported by ET.