Scott Disick is going through some sort of existential hair crisis. The 37-year-old debuted a new platinum blonde dye job on Feb. 11 when he hit up Miami with girlfriend Amelia Hamlin for Valentine’s Day weekend. While he seemed happy with the new look, he’s taken a page out of Kylie Jenner‘s playbook and done an immediate color switch-up to keep things fresh. Scott now has bright pink hair, along with a closer-cropped hairstyle

So far Scott himself hasn’t made the big reveal to fans.  But he allowed Miami barber Luis Rivera to show it off via his Instagram page on Feb. 19. “Here I am posing for the photo with the great @letthelordbewithyou after dying his hair and cutting it,” he wrote in Spanish in the caption before adding in English, “Thank you for everything my brother @letthelordbewithyou.”

It sounds like Scott’s pink hair decision happened on a moment’s notice, as Luis went on to add in Spanish, “Opportunities come and you have to be ready at the moment to receive them and be sure that the doors are open for you. Let your humility, responsibility and good work insure that they never close!” 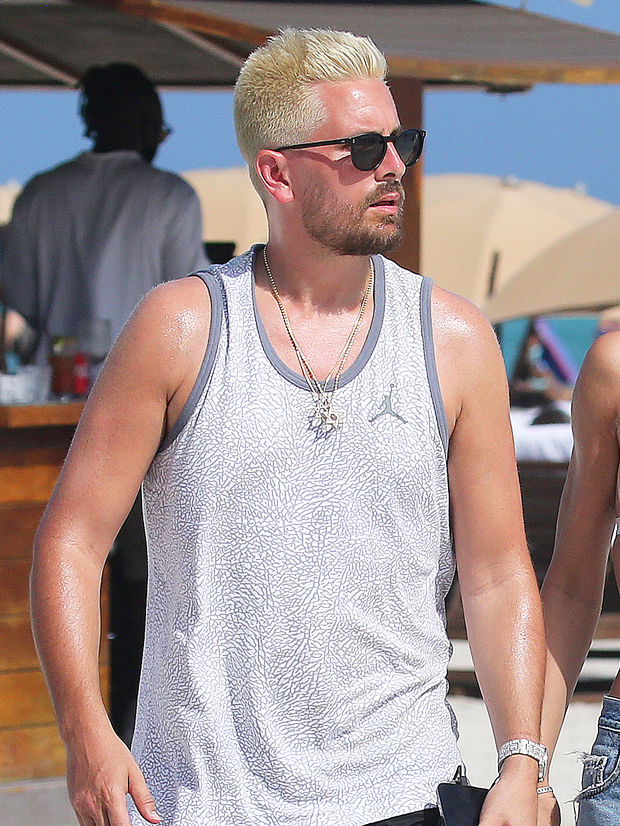 Scott Disick shows off his brand new platinum blonde locks on the beach in Miami on Feb. 14, 2021. Five days later, he had his hair dyed bright pink. Photo credit: MEGA.

The father of three kept his darker facial hair despite his new bright pink tresses. He still has a closely cropped light brown beard and mustache in the photo, as he wore a grey hoodie and two large gold Star of David pendants around his neck in the snapshot. While The Lord hasn’t shown it off to his fans, the reaction on Luis’s page unveiling Scott’s new the look had nothing but flame and red heart emojis in the comments from folks who love the Keeping Up With The Kardashians star going Miami-pink.

Scott still had his platinum locks as of five days ago, when he shared an Instagram photo of himself behind the wheel of a luxury whip and wrote, “Livin la vida Lambo.” Not only was his hair light blonde, it was longer on top and spiked, with closely cropped sides. In the snapshot with his new pink shade, his hair was shorter on top, though he still wore it up in the same spikey ‘do. We can’t wait to see what his current lady Amelia thinks about Scott’s look, as well the reaction from his ex Kourtney Kardashian and their three kids.