Donald Trump has long been known for his unhealthy eating choices. But now his dining out habits are being revealed, and some of his practices are just plain bizarre.

Former President Donald Trump‘s deep love of Diet Coke and fast food is a well known fact. But when he was POTUS, the 74-year-old had a fine dining ritual for those four years whenever he headed to the upscale BLT Prime restaurant inside the Trump D.C. Hotel. There was even a Standard Operating Procedure manual that staff had to follow whenever Trump came in, which has been obtained by the Washingtonian. It revealed that table 72 of the eatery was always on constant reserve for when Trump decided to eat there.

Even though Trump refused to wear face masks during the COVID-19 pandemic, he apparently was a germaphobe while dining out. When he arrived at BLT Prime, the POTUS was “discreetly” given a mini bottle of Purell hand sanitizer. He also demanded that his Diet Coke choices be presented in a certain way and the pouring involved seven steps. It began with the waiter asking, “Good (time of day) Mr. President. Would you like your Diet Coke with or without ice?” The publication reports that “A polished tray with chilled bottles and highball glasses was already prepared for either response.” 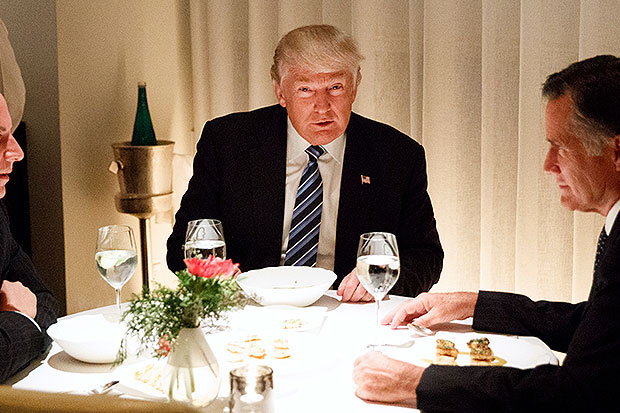 “The beverage had to be opened in front of the germaphobe commander in chief, ‘never beforehand.’ The server was to hold a longneck-bottle opener by the lower third of the handle in one hand and the Diet Coke, also by the lower third, in the other. Once poured, the drink had to be placed at the President’s right-hand side. ‘Repeat until POTUS departs,” the instructions reportedly continued.

According to the S.O.P. document, Trump always had the same order: “Shrimp cocktail, well-done steak, and fries (plus sometimes apple pie or chocolate cake for dessert). Popovers — make it a double for the President — had to be served within two minutes and the crustaceans ‘immediately.'” Trump’s germaphobe habits came into play again, as the server’s instruction manual advised that they “open mini glass bottles of Heinz ketchup in front of Trump, taking care to ensure he could hear the seal make the ‘pop” sound,'” according to the Washingtonian.

Perhaps the most unusual aspect of the instructions was the amount of candy and snacks that had to be on hand for when the president dined at BLT Prime. It was required that  “A tray of junk food needed to be available for every Trump visit: Lay’s potato chips (specifically, sour cream and onion), Milky Way, Snickers, Nature Valley Granola Bars, Tic Tacs, gummy bears, Chips Ahoy, Oreos, Nutter Butters, Tootsie Rolls, chocolate-covered raisins, and Pop-Secret,” according to the site. As if he couldn’t get those in the White House as well?! 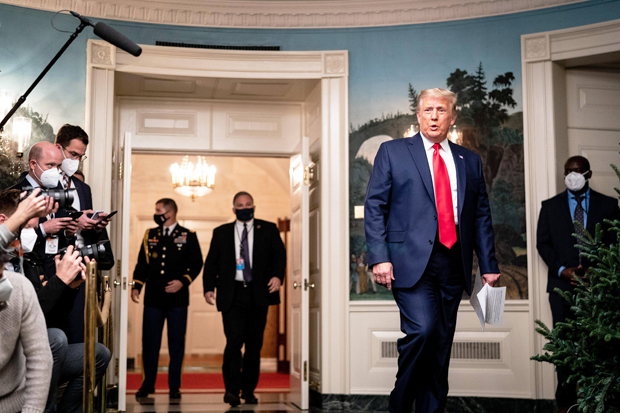 Donald Trump loved Diet Coke so much he had a red button on his Oval Office desk that when pressed immediately had the soda delivered to him. Photo credit: MEGA.

Trump’s love of Diet Coke was so great that he had a red button on the Resolute Desk in the Oval Office that when pressed, the soda would be delivered by a butler. U.K’s Time Radio Chief Political Commentator Tom Newton Dunn pointed it out in a tweet showing photos of freshly inaugurated President Joe Biden at the Resolute Desk on Jan. 20, 2021 compared to Trump’s previous setup.

“President Biden has removed the Diet Coke button. When @ShippersUnbound and I interviewed Donald Trump in 2019, we became fascinated by what the little red button did. Eventually Trump pressed it, and a butler swiftly brought in a Diet Coke on a silver platter. It’s gone now,” Dunn shared, stunning the world that Trump actually had a Diet Coke button on his desk!

Trump’s love of fast food has has also been well well documented. His first wife Ivana Trump claimed that Donald’s greatest “weakness is the Big Mac” from McDonald’s. During a Jan. 2019 White House visit by the newly victorious the NCAA football champion Clemson Tigers football squad, Trump had McDonald’s, Burger King and Wendy’s items laid out on expensive platters for the players as their dinner. While the visit did occur during an ongoing government shutdown over his border wall funding demands, Trump told reporters that “I would think that’s their favorite food,” when discussing his cheap and greasy dinner selection for the elite athletes, as he himself loved the stuff.