Machine Gun Kelly is such a doting dad! The “Bloody Valentine” hitmaker, born Colson Baker, took to Instagram on February 11 to share a series of snaps with his 12-year-old daughter, Casie Colson. “our first movie together,” he captioned the post, which featured behind the scenes photos of the father-daughter duo working on a project together. The first pic was a selfie of the pair cuddled up together, while wearing matching, fluffy headbands. It was followed by a short clip of MGK handing his daughter a bouquet of orange roses after finishing a take.

The post also featured a snap in which the pair both wore skinny jeans and black sneakers, proving Casie truly is his mini-me! MGK also shared a solo shot of himself rocking rocking pastel pink hair, a white tank top, and dark blue pants with chain detailing. While the singer shares Casie with his his ex Emma Cannon, MGK’s relationship with Megan Fox appears to be heating up!

The couple, who have been dating for almost one year, put on a very loved-up display in New York City on January 30. He was seen carrying the actress into the studio where Saturday Night Live is filmed ahead of his performance on the long running show. The couple exited a car, without face masks, and were all smiles as he lifted her up, before walking into the building hand-in-hand. In fact, the pair have practically been joined at the hip since falling for each other while filming Midnight in the Switchgrass in the spring of 2020. 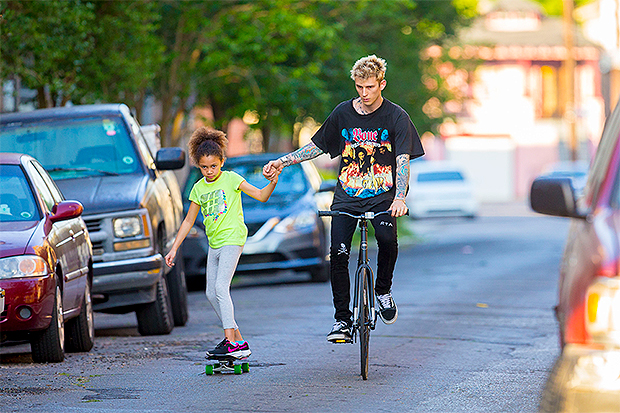 Back in October 2020, HollywoodLife EXCLUSIVELY reported that MGK would love to marry the Transformers star and start a family. “MGK’s friends have never seen him like this before, he’s so in love with Megan and pretty much spends all his time with her,” an insider told HL. “He says he wants to marry her and he wants her to have his baby, he talks about that very openly. Being with her has definitely tamed him, he’s laser focused on her.”