The Morning Show star Jennifer Aniston is 52, and her longtime hairdresser Chris McMillan shared a stunning photo of the actress in tribute to her big day. “HAPPY BIRTHDAY JEN. Love YOU!!!!! Sooooooooooooo much Lol,” he captioned the February 11 photo. The pic, which was a mirror selfie taken by Jen, showed the former Friends star sitting in a chair wearing a tiny slip dress! The blush pink mini dress featured spaghetti straps, and was ruched at the bottom as Jen lifted up one leg. Meanwhile, Chris was hard at work styling her highlighted tresses.

Of course, he wasn’t the only man close to Jen who wished her a happy birthday. Her ex-husband Justin Theroux wrote a sweet tribute to the actress, three years after their divorce. He posted a black and white shot which showed Jen standing at the bottom of a staircase with a slight smile on her face. “Happy birthday @jenniferaniston. Love you B!” So sweet! Justin actually wishes his ex-wife a happy birthday every year, and includes the mysterious nickname “B”. Last year, he posted another black and white photo of Jen clenching her fists and yelling at a bowling alley. “Grabbing 2020 & another year just like — HAPPY BIRTHDAY B,” he wrote at the time. 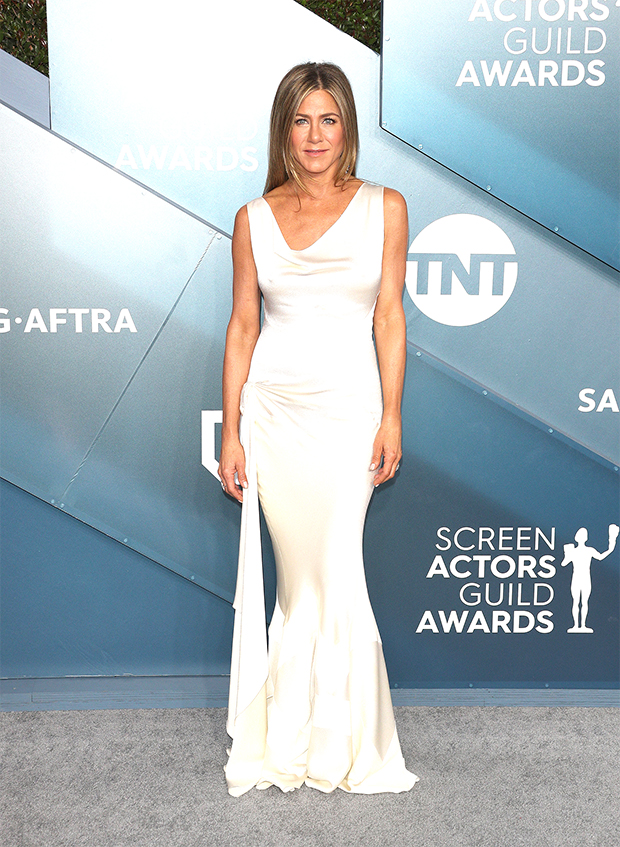 The couple parted ways in 2018, which Jen described as “mutual and lovingly made.” The newly-minted 52-year-old said in a statement at the time that despite calling it quits, she and Justin were just “two best friends who have decided to part ways as a couple, but look forward to continuing our cherished friendship.” The exes have gotten together multiple times since their split for both friendly hangouts, and tougher reunions, like the passing of Jen’s beloved dog in 2019.