Joe Pesci‘s newly minted lawyer Vinny Gambini might have got off to a rough start in defending his New York cousins in a an Alabama murder case in the 1992 comedy My Cousin Vinny. But he ended up doing a far better job than the inept public defender his relatives had used in the case. As Donald Trump‘s second impeachment trial got underway, folks on Twitter compared the former president’s lawyer Bruce Castor to that of incompetent public defender John Gibbons in the film, as opening statements began.

Rambling. Reminds me of the lawyer from My Cousin Vinny pic.twitter.com/jfJW442AgF

Stuttering lawyer from My Cousin Vinny was clearer than #BruceCastor
Ramble on. pic.twitter.com/GqpCQYvQ7z

As a result of Castor’s performance in his opening arguments — combined with it being Joe’s 78th birthday — My Cousin Vinny began trending. User @Philmachinist asked, “Anybody else thinking about the Public Defender from “My Cousin Vinny?” while @CelesteHeadlee defended Joe’s movie character, tweeting, “My Cousin Vinny is trending right now and I find the comparison to the impeachment lawyers to be highly insulting to Vincent LaGuardia Gambini.” 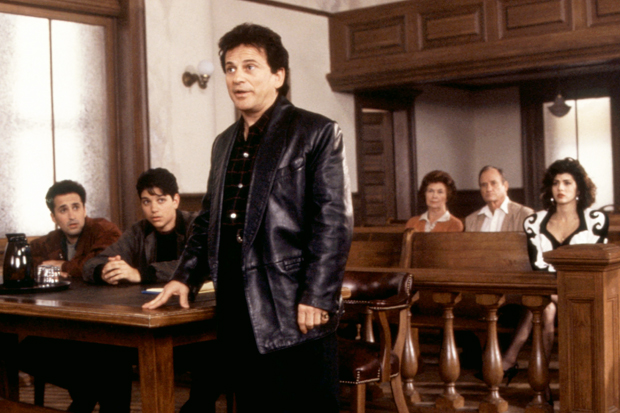 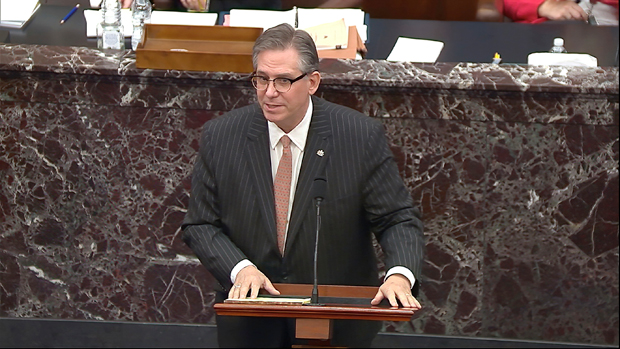 Bruce Castor, an attorney for former President Donald Trump speaks during Trump’s the second impeachment trial before the Senate at the U.S. Capitol. His performance was so lackluster it was compared to the public defender in ‘My Cousin Vinny.’ Photo credit: Senate Television/AP.

User @daveweigel commented “This is a ‘My Cousin Vinny’-level mismatch of opening statements so far,” as @AriBerman tweeted, “Jamie Raskin talked about burying his son & worrying his family would die in a coup while Bruce Castor is impersonating My Cousin Vinny.”

So thoughtful of Trump's legal team to reenact My Cousin Vinny as a birthday tribute to Joe Pesci. (It really is Joe Pesci's birthday today!) pic.twitter.com/myJYHrigRc

I was JUST going to say, my cousin Vinny could have done a better job ! LMAO 🤣

Others drew comparisons to when Joe’s Vinny first started trying the murder case and was so out of his league at the time. Thankfully, his legal skills ramped up fast and he ended up victorious in the end. But not so much at the start of the trial. One fan tweeted, “So thoughtful of Trump’s legal team to reenact My Cousin Vinny as a birthday tribute to Joe Pesci. (It really is Joe Pesci’s birthday today!)

As My Cousin Vinny trended, other Twitter users took the opportunity to wish Joe a very Happy 78th birthday by noting some of his many memorable roles. The actor is mainly known for playing mobsters and bad guys, as evidenced to perfection with his Best Supporting Actor turn in 1990’s iconic Goodfellas. But in My Cousin Vinny, he got to show off his incredible comedic chops. Who’d have guessed that 29 years later, his character would get name-checked in a presidential impeachment trial!