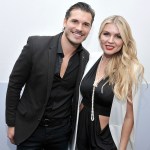 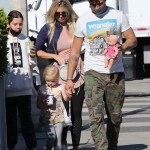 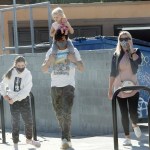 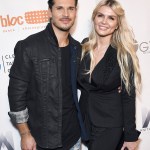 ‘DWTS’ pro Gleb Savchenko and his estranged wife Elena Samodanova put on a united front while out with their kids, Olivia, 9 and Zlata, 3, on Dec. 30. The exes split in Nov. after 14 years of marriage.

Gleb Savchenko and Elena Samodanova have gone their separate ways romantically, but it appears as though they’re amicably co-parenting. The estranged couple reunited in West Hollywood on Wednesday, where they were photographed walking with their two daughters Olivia, 9, and 3-year-old Zlata. The Dancing With the Stars pro, 37, and his estranged wife, 36, announced the split last month after 14 years of marriage.

It’s unclear what exactly the family outing entailed, however, both parents and their kids were dressed casually. Everyone wore sneakers, while Gleb, who sported a white Wrangler tee, and his oldest daughter donned matching camouflage pants. Meanwhile, Elena wore a long pink top over a pair of black leggings. She was pictured talking on the phone while wearing black sunglasses.

A second snap showed the family of four walking, while the youngsters sipped on smoothie beverages. Gleb held hands with his 3-year-old daughter as he carried her baby doll so she could enjoy her drink. Additionally, the family wore masks amid the COVID-19 pandemic.

Gleb and Elena’s reunion came less than two months after she was first to announce the couple’s split. On November 6, the So You Think You Can Dance star, 36, made the revelation on her Instagram Story, writing, “After 14 years of marriage with my deepest sadness our road is coming to the end” on top of a photo with Gleb during happier times. Elena also confirmed the breakup in a fiery statement to People, in which she alleged Gleb was unfaithful in their marriage.

“After 14 years of marriage, and multiple affairs, I’ve decided enough is enough,” Elena told the magazine, explaining, “Gleb and I have created a family and multiple businesses together. But apparently, it just wasn’t enough to keep our marriage strong… Gleb’s ongoing infidelity and a recent inappropriate relationship has created turmoil in our marriage and absolutely torn our family apart,” Elena claimed.

For his part, Gleb confirmed the breakup, but denied his ex’s allegations of infidelity. “While I will continue to respect the privacy of my family, I will not stand by and allow false accusations and internet rumors go unaddressed,” he said in a statement to People through his representative. He went on to set the record straight about his friendship with Selling Sunset star Chrishell Stause, who was his partner on the latest season (29) of Dancing With the Stars.

Gleb and Chrishell, who’s now dating DWTS pro Keo Motsepe, were at the center of romance rumors when the season aired this fall. Though, both Gleb and Chrishell maintained that their relationship was strictly platonic. Gleb echoed the latter in his aforementioned statement to People: “My relationship with Chrishell was and remains strictly platonic,” he said, also confirming that the duo’s “friendship during our season on DWTS was not the reason” for his split with Elena.

He continued, “Elena and I have had longstanding issues in our marriage. This has been an ongoing situation between Elena and I paired with poor timing. It was my deepest hope to keep our private life just that: private. I am saddened and disappointed to see that Elena has chosen not to do the same,” the statement concluded.

Despite going their separate ways, Gleb and Elena seem to be in great spirits. Throughout December, the exes have been spotted on tropical getaways with new love interests. On December 17, Gleb packed on the PDA with Sharknado actress Cassie Scerbo during a joint vacation with Chrishell and Keo in Cabo San Lucas, Mexico. Not even a week later, Elena was spotted kissing a new man on the beach… in Cabo San Lucas, Mexico. Page Six, which published the photos, identified the man as 25-year-old Vlad Kvartin, who they claim is a Dancing With the Stars alum. — What a small world!