Adam Levine revealed his feelings about possibly returning to ‘The Voice’ using just three words, and his message is an interesting one.

Adam Levine served as a coach for 16 seasons on The Voice. He was even a part of the show when it premiered in April 2011, but in May 2019 — after becoming the reality show’s winning coach three different times — the Maroon 5 frontman made the shocking decision to leave the series and he doesn’t seem to regret the choice that he made. 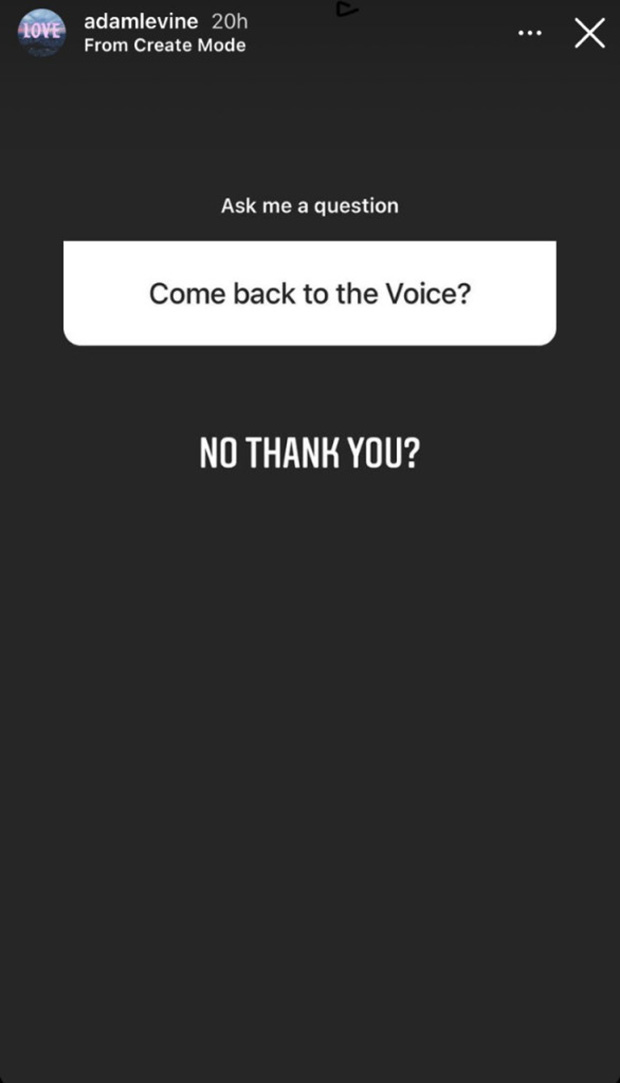 In fact, during an Instagram Q&A session with his fans on Dec. 28, Adam was asked whether he’d ever take a seat in his red swivel chair again, but his response tells us that he’s definitely not interested. “No thank you?”, he asked.

As you’ll recall, Adam parted ways with the series after all of his team members were eliminated before Season 16’s Semifinals. And when asked about his exit on Howard Stern‘s SiriusXM radio show in Oct. 2019, he revealed he quit The Voice because he “was ready to not be doing it anymore for a little bit”, and it felt “right”.

For eight and a half years, Adam said he was “so busy” with the show and his band, and he needed a break. Especially after getting married and having two kids with wife Behati Prinsloo. “If you’re lucky, you get to fall in love with someone twice, and I’m very much in love,” he told Howard at the time.

And while it’s already been almost two years since Adam left the series, it doesn’t sound like he’ll be returning anytime soon. But even so, he still loves mocking his longtime frenemy, Blake Shelton. During the same Q&A, Adam was asked whether he missed working with Blake, and Adam jokingly said, “Blake who?”

Ah, some things will never change.